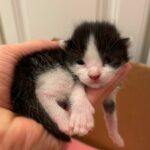 From where I sit, legs dangling off the edge of the world, ready to be caught by 120 strong cats, I can tell you the following with a high measure of confidence:

We have had ourselves a capital-M Month.

This is not because March is uniquely gifted at flaunting its ability to outdo all eleven lesser months at every conceivable form of weather (snow squalls, summer swelter, ball lightning, snow doughnuts).

(Let us all pause for a moment and give thanks that we live in a world that contains “snow doughnuts.”)

This is not because March brought us something called Coca-Cola Starlight, which is apparently “space-flavored,” and constitutes the most exciting supermarket moment in my adult life.

This is, of course, because March was rich in cats, who are fashioned entirely of starlight.

Promoted to the Lobby: Houston

Promoted to the Community Room: Houston (a consummate climber and promotion-pursuer, next stop: Neptune)

Stuff We Learned: Crooked stitches and crooked smiles still hold the world together. Trembling hands can still make something beautiful. The little flapping flags of mercy that we thwunk into our tiny thatch of earth at Tabby’s Place somehow send peace shooting out in all directions.

And if anyone asks you to limit your expectations when it comes to April, tell them: “I decline, for secret reasons.”

The Consetta concession
Guest post: A lot
Epilogues: April 2022
Do it for the kitten
Shaky stitches