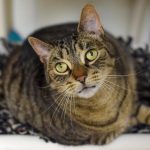 Did you know that the baby who played the baby Toby in Labyrinth was also named Toby?

Did you know that baby Toby is now the design supervisor for the Dark Crystal reboot, and doesn’t that kinda make your brain explode with stardust?

Did you know that, despite my endless love for them, this post is not about freaky 80s films? 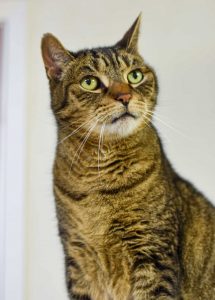 It is, however, about a different labyrinth, and the very different Toby who has walked its rings.

Toby will always be our baby Toby, but there’s nothing infantile about him. The long-necked, sad-eyed tabby is fourteen now, six years older than when he left us in a flurry of joy.

He doesn’t look any older; he doesn’t act any older; but Toby’s teardrop eyes have seen sorrow, and his tiny brown feet have trod circles of grief. Toby’s beloved Dad died earlier this year, leaving one of our all-time kindest cats confused, confounded, and on the verge of a conniption fit.

As confused as Toby was to be back Casa Tabby, he did a fine job of confusing the chowder out of us. Who was this growly, grouchy, hissing and hate-hurling guy occupying the body of our old buddy? Toby, after all, was the mellower of the Brooklyn boys, the gentle, lazy, Type B counterpart to louder Lester‘s gangster. Lester was the one with a fuse shorter than a Sicilian pizza crust; Toby was the one who loped out into the hall just to steal an extra hug from the human who had to retrieve him. 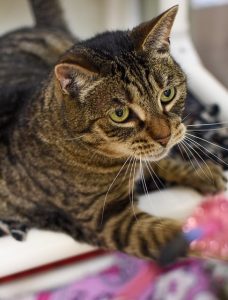 But the new, older Toby had walked paths he couldn’t talk about, and what we can’t talk about we boil and bubble deep within. Toby’s trauma erupted in snarls and hisses at any cat who crossed him. His interior world was a churning cauldron, and all he could do was ache in the key of anger.

You’ll meet many people who guffaw at the concept of a grieving cat. “Bollocks,” they’ll say. “Cats have very simple brains, incapable of complex emotions like grief and regret and ambivalence about the new Taylor Swift album. We simply project our feelings onto them, and we should stop doing that, forthwith.”

To which I say: forth with yourself. Preferably in the Bog of Eternal Stench.

Toby is truly grieving, and this labyrinth is no piece of cake. Such sorrows turn us all back to babies, even at fourteen or forty years of age. 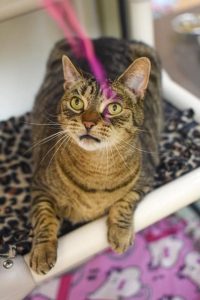 But Toby, even at fourteen, is still the babe with the power. And as days and weeks go by, he’s reclaiming that power.

Bit by bit, the light and hope is returning to his eyes. First he stopped hissing; then he started napping, near-if-not-dear to other cats. The child inside Toby remembered how to dance. It’s only a matter of time before he remembers that he can make a magic jump out into the hall, that happier labyrinth where hugs are guaranteed.

Toby’s road ahead — like yours and mine — is a maze and a mystery. We can’t predict whether or not he’ll be readopted at fourteen-plus, or if he’ll ever seem to remember Lester (the jury is very much out on that one), or if his crankiness will re-surge and why. But Toby’s trail — like yours and mine — is held secure by love. We will be here for him on every bend in the path, loving him in all of his years and seasons, into the serious moonlight and far, far beyond.

PS: I swear the cats conspire to make a liar out of me. Approximately four seconds after I finished writing this post, it was universally agreed by our Sanctuary Associates, that, in fact, Toby has been a beastly beastly beast towards his neighbors, and henceforth shall start on behavior meds immediately. So…yeah, he’s doing better, except in the ways he isn’t.