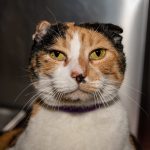 It has befallen us.

This is not a drill.

We simultaneously have a Puddin’ and a Dumpling.

Don your ceremonial garb. Ready your trumpets and sousaphones and kazoos.

It is to our great shame that we had not previously hosted a cat bearing either of these titles. Let the record show that I campaigned for years for an entire filled-dough-pouch litter, in which there would be Dumplings and Pierogis and Wontons and Gnocchis galore, but ever since I dared to name a cat Jean Valjean, my naming suggestions have fallen on deaf ears. (More accurately, they have fallen on ears with hands clamped over them, by people shouting, “Noooooo moooooore!” whilst I sang all the parts in “One Day More,” which probably didn’t help.)

At any rate, my cries — and the untiring drumbeat of justice — have finally been heard. We have ourselves a Dumpling.

I’m afraid I can’t take credit for this. (I will, of course, but I oughtn’t.) Even if I had never proposed the name “Dumpling,” this cat, this most glorious cat, would have demanded it without saying a word.

Enough dithering around. Behold your Dumpling.

In any language, in any land, this cat would have been named Dumpling. She is not simply called Dumpling; she is Dumpling. She defines “Dumpling.” She exudes the essence, the eau de Dumpling. She renders the name “Dumpling” unfit for all other creatures. 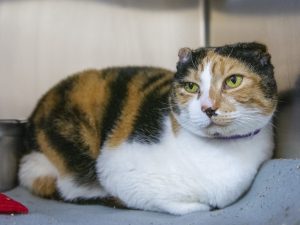 The age of Dumpling has dawned upon Tabby’s Place.

As you might guess from her photos, Dumpling is equal parts dollbaby and roller derby diva. She will love you. She will dump you on the floor. She will meow at you musically. She will growl at you grandly. She will take you to the opera, and she will demand you take her to the demolition derby.

She is the Dumpling we always dreamed of, multiplied by five billion.

The dawn of Dumpling would be divine enough to fill our hearts, but our luck was larger still. The heavens must have heard that 2020 is a weird year around here (by which I mean Earth), and so they’re coddling us with unspeakable joy.

We would not only get our Dumpling. We would also have dessert. It was time for Puddin’.

I confess I’m not generally a fan of turning “-ing” into “-in'” where names are concerned. “Dumplin'”, for instance, would have been offensive to the greatness that is Dumpling. But sometimes -in’ is smashin’: exhibit A would be Nuttin‘ (God rest his spectacular soul).

With his sad eyes and tapioca tenderness, Puddin’ is ten thousand teaspoons of love squeezed into one Jell-O pop of bashful belovedness. He’s not as glam or flamboyant Dumplin’, but then, neither is Lizzo. Besides, dessert is a quieter course, and if you take the time, Puddin’ will pour you a cup of chamomile and spoon out his secrets and stories. 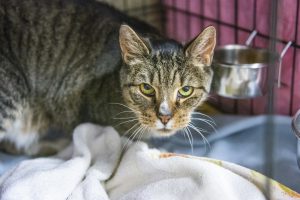 He loves Bach. He reads Brené Brown. He adored Mister Rogers long before the Mister Rogers renaissance. He is a gentle tub of tabby with a hard-knock past, a heap of heart disease, and a hearrrrrrrt full of love.

And we are tumblin’ and swoonin’ and fallin’ all over each other with bliss these days.

No, kittens, this is not a drill; the feast of fun and frippery is afoot.

angela is not right in the head dumpling puddin'

Don’t take the bait
The tapes we play
Easy, easy
Funky from now on
Verde and the hurdy gurdy