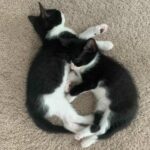 Catching me in the throttling throes of grief, a well meaning person once said, “well, I hope you’re a little less sad each day.”

I told her that I earnestly hoped the same.

But you know and I know that’s not how sorrow works.

If you’ve lived long enough to read these words, sorrow has surely worked its way through your galaxy. Your nebulae have been frayed; your ineffable light has been blindfolded; and you’ve lived hours that have felt like light years dangling from the dark side of the moon.

Were it in my power, I would spare each one of you from ever going through this. But my well-meaning “mercy” would have the awful effect of hurling you into a universe free of pain and love. Love may be stronger than death, but this side of heaven, you can’t have one without the other.

And you can’t expect grief to give you a calendar of events.

By the time you read this, the world will have rotated something like 90 times since the passing of three kittens. 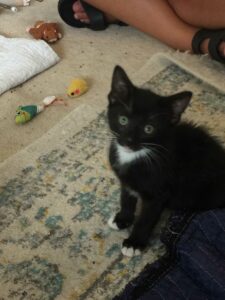 The Gem Fam came to us with sacred sparkle and priceless value, an aptly named handful of hope-diamonds. Together with their mama Onyx, who seemingly had the verse “Love is patient” embroidered inside her brain, the black-and-white wild children walloped us with their sweetness and their splendor and their shine.

In the most unsurprising turn of events since I last cried over a Hallmark card, each micro-dazzler found a family, and life in the velvet jewel-box of Forever was sweet indeed. Opal, Feldspar, and Tourmaline were unrepeatable, the only jewels of their kind since the birth of the earth itself, and their families were fully aware that they’d taken home great treasure.

And then the world turned upside-down.

First tiny Tourmaline, then incandescent Opal, and finally fiery Feldspar snapped loose from the charm bracelet. As feline diseases go, you’d be hard-pressed to find one crueler than FIP. As vicious as it is inexplicable, the condition is associated with feline coronavirus (oh savage irony!). While most cat coronaviruses are as mild as the mist, FIP cuts hard, and fast, and fatally.

There was nothing to do but gasp and grieve. 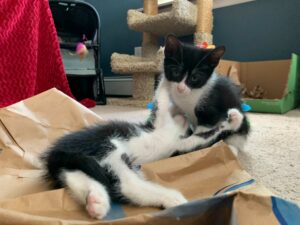 Jewels on the loose, the gem kittens fell softly into everlasting arms.

We sing and whisper and remind ourselves and each other that we will see them again.

Even if we don’t believe there’s light across the veil, we marinate in the soul-soup of memory, making ourselves focus on the love that we shared, the lifetimes that we jammed into a few weeks, the value of a life bejeweled with bliss, be it ever so short.

But all the faith and trust and resurrection-minded hope in the world can’t short-circuit sorrow.

I imagine that each of these families, torn from their tiny ones so soon, is still grappling with grief these ninety-ish days after the world smashed open. Of course they are. When a jewel thief takes the tenderest gift in your kingdom, you don’t quite “get over it.”

And you don’t get to schedule the sorrow. When we love and lose this big, we lack the luxury of a linear “process.” 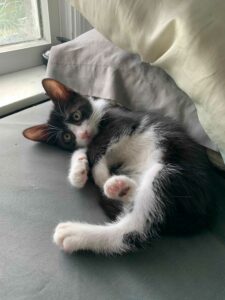 If grief is not a straight line, perhaps its more like a large man with a face so intense, you can barely look him in the eyes. I’m picturing Danny Trejo, only several orders of magnitude taller.

Grief stands behind a counter with a bowl of black marbles. When your world first shatters, he unceremoniously places the bowl in front of you. You can’t reject them. You can’t give them back. You can only stare at them, and him, and let his steady dark gaze do its bewildering work on you.

Some days, Grief will remove a single marble. Some weeks, he’ll do this for several days in a row, and you’ll even believe that each day is a little less sad.

Then he’ll suddenly shove the entire bowl back at you with great force, and it’ll take all your strength and your breath just to catch it without toppling. And you may topple. And Grief will keep gazing at you.

Some days, he’ll turn jarringly childlike, grabbing fistfuls of marbles and taking them back behind the locked door whose key he alone owns. You’ll think they’re gone. You’ll think it’s ending, or at least easing.

And then he’ll come back with a 55-gallon drum of marbles you didn’t know about. 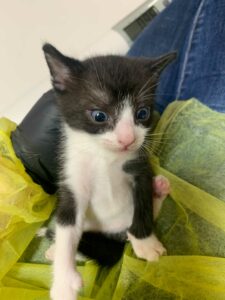 But Grief is not your enemy, and he’s not playing with you. Or, rather, he is, but in the way of saints and children, albeit the unruly sorts you wouldn’t have personally invited to dinner. Some days, Grief will shoot marbles with you, and you’ll find yourself remembering and sobbing and laughing and brightening all at once, all in spite of yourself, all because you loved enough to shatter.

You’ll never lose all your marbles.

You will learn to treasure their smooth solidity, feeling them turn into touchstones between your fingers — gems, even.

You will learn what it means that — yes — love is stronger than death.

And maybe you’ll be ready when a glassy-eyed friend staggers your way with a heart that’s just been ransacked.

And maybe we can all just hang onto each other with all our might, whatever kind of day we’ve been dealt.

Kittens, I believe with every starcluster in my soul that life outlives death, and that the very hugeness of our hurt is a sort of recognition that “goodbye” has a shelf life, and “together” will triumph yet again. But until the day when that last veil is torn and all the marbles roll back into the ocean, we will grieve, and grieve, and grieve again, and grieve the old griefs as though they were fresh gashes.

But we don’t grieve as those without hope.

And, since you’re part of the Tabby’s Place family, we don’t grieve alone.

1 thought on “Losing our marbles”