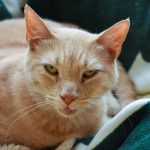 Here’s something to look forward to:

Someday we’ll be dignified and old. Together. 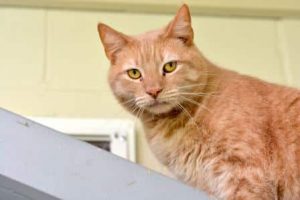 OK, I hear your laughter and your objections:

For those who have been following us since the world was young, Steven is not a new face. Even when Steven first arrived at Tabby’s Place, aged c. 5 weeks, Steven was not exactly new.

Steven was a kitten — a “baby kitten,” if you will. (You would scarcely believe how often we hear this distinction: “Is he a kitten, or, you know, a baby kitten?”) 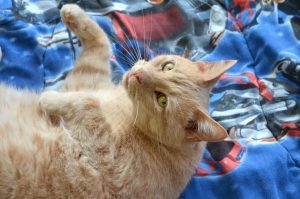 Steven was new to Earth and breath and Tabby’s Place.

Let the record show I am not saying Steven was an “old soul.” Not exactly. That would imply solemnity and decorum, two qualities neither Steven nor I have much hope of possessing even now that the world is a good deal older.

Constipation and dehydration and an all-around ooky start to life had left Steven so shriveled and shrunken, he resembled a raisin that had long since given up any dreams of reverting to a grape. He may have been the size of a gerbil, but he had the face of Bernie Sanders. (Let the record show that Steven wanted me to write “Betty White,” but frankly she looks a good deal younger than he did, not to mention a good deal younger than most millennials and half of Generation Z, but I digress.) 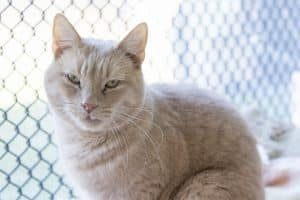 But even when we plumped the infant raisin full of water and good food and grand kittenly health, Steven remained geriatric.

He preferred the cozy couch and bottomless cups of conversation to wand-toy wildness.

He practiced peace and pausing and pondering instead of pouncing.

He waxed mindful and made every moment meaningful.

He became the golden Dalai Lama of the solarium, beaming and beatific and occasionally even awake. His message of joy was for all people of all species. His cuddles were unrestricted to the clean or the friendly. 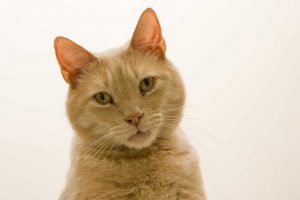 The hard lessons of childhood and adolescence skittered past like the many jingle balls that didn’t interest him.

Steven was born with a pure heart and an ageless grace.

And at this tired moment in history, when the world itself feels like a moth-munched cardigan, Steven is literally old.

At twelve, he’s seen three presidents and hundreds of volunteers and thousands of fireflies (and nominated many members of the latter two groups for the former office, to no avail).

At twelve, he’s faced the music of a changing body and changing times and a changing cast of cats. This week’s cuddle companion is next week’s heart on the “Adopted” or “Forever Loved” board. Tomorrow’s arrival may be a soulmate. Steven greets and tenderly treats each new and old friend accordingly. 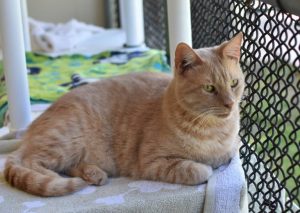 At twelve, he’s one of our oldest old timers, up there with Faye and Angelo, Adam and Elijah, for the rotating record of Longest Continuous Stay At Tabby’s Place. (Let the record show that all five of these elderlies have repeatedly requested, in recognition of their years of service, not a gold Rolex, but a trip to the esteemed Carousel Deli, Tabby’s Place’s near and nourishing neighbor, from whence cometh tales of egg salad and cheeses plural and something large and illustrious called a “hoagie.”)

He has yet to show a scrap of “dignity,” as commonly defined. His eyes are a little crossed, his litter box habits are a little haphazard, and his taste in music is a little disconcerting (it’s uncertain whether “peeing outside the box” or “listening to large quantities of Justin Bieber” is the real reason he’s not been adopted in twelve years). 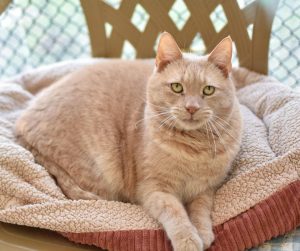 But if dignity means anything, I’d venture to say it looks a lot like relentless kindness alloyed with the total absence of fear.

That sure sounds like one gingersnap-colored old man of my acquaintance.

If Steven can handle a full lifetime of old age with this kind of dignity, there’s hope for us, my fellow aging kittens.

If we spend enough time with this sort of sage, I’m optimistic: someday we’ll be dignified and old. Together.

(With very special gigantic bonus thanks to my cooler-than-Christmas husband for introducing me to this song, which has been in my head for approximately three years, and now it shall be in yours, no I’m not sorry.)