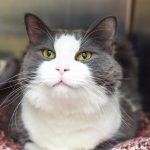 Let’s get this out of the way.

I realize “Captain Corelli’s Mandolin” is universally considered a terrible movie. You realize this. Morelli Rosenberg (more on him in a moment) realizes this.

Unlike the rest of you with your sophisticated tastes, I do not care. I am among the proud, lonely 28% who gave it two thumbs up on Rotten Tomatoes. I will blubber like a Sicilian nonna every time I see it, and, yes, I will willingly see it repeatedly.

And now we can move on. 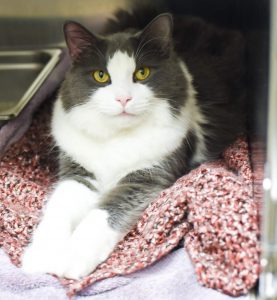 We can move on to Morelli, who is universally considered a terrific cat.

Title to the contrary, this post is actually in no way inspired by the Nic Cage film of which we shall not speak further. By ferocious coincidence, Morelli happens to also (a) hold the rank of Captain and (b) own a mandolin. Kind of.

The rank is beyond dispute. I mean, just look at this luscious leader. Is there any question that he could command platoons, with grace and integrity and wild-haired wisdom? He’s a peacetime guy, but make no mistake; this honorable cat is a capital-C Captain.

But he’s a near-Major with a mournful song, and that’s where we meet his mandolin.

Like our lady Sadie, Morelli had a home once. But when his human moved, she made no room in her new life for the good Captain. And so he was back at the public shelter where she’d adopted him.

Faster than you could dance the tarantella, sorrowful strains were weaving their way through the bars of Morelli’s cage. He stopped eating (the easiest way to worry your nonna); he slunk to the back of his quarters alone; he was doing poorly and making moony music, a feline mandolin with sighs for strings. 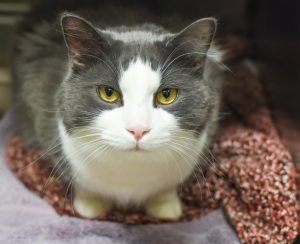 It was no calling for a Captain.

Happily, he had not reached the coda.

Morelli’s march made a sharp turn hopeward, and before you could tempt him with tartufo, he was Tabby’s Place-bound. As you can imagine, we were all yelling “Bravissimo!” the moment we met him, but Morelli’s melancholy would take time to meander its way out. His early days at Tabby’s Place were still tinged with torment, the sound of the sad mandolin heard in his hiding and hesitation.

There would be time.

Morelli may be a Captain; but Tabby’s Place is collectively a forty-star General when it comes to restoration. The sad-eyed boy’s days of despair were numbered.

And now we’re universally considering ourselves blessed and besotted, falling in line behind a cat of colossal honor.