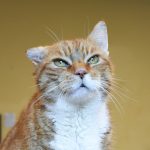 The mailboxes at my condo complex are being replaced due to the fact that they are, and here I quote the venerable Association, “aging and have an inconsistent appearance.”

That does not bode well for any of us. 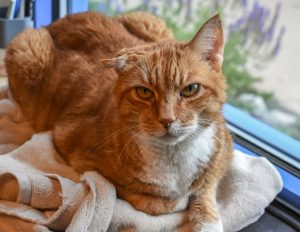 Keeping up unmottled appearances may seem like a good idea, but we’re all one sloppy sneeze away from, shall we say, an “inconsistent appearance.”

A spotlight zit.
A spectacular miscalculation.
A searing sorrow.

Fortunately for the Tabby’s Place cats, our adopters see what is essential, invisible — or, more accurately, exquisitely visible in its mottled, madcap magic.

Bosco‘s ear is exuberantly inconsistent with its companion. Across from an ordinary orange triangle, a perfect iscosceles Dorito of auditory perfection, stands a flat fluke of a flap, a paprika-smothered pinna that appears to have been stomped upon by sixteen oversized orangutans. 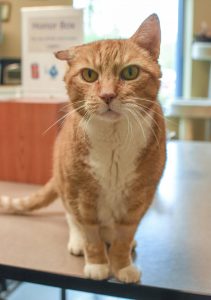 (I am grateful to report that this was not, in fact, the origin of Bosco’s ear oddity. Funky, flappy, cauliflowered ears in cats are usually the result of hematomas or infections left untreated too long. Then again, Bosco has no definitive record in the Annals of Ears, so let’s go with the orangutans after all.)

Bosco himself is on the “aged” end of aging.

Bosco’s adopters adore him exactly as he is.

But your mailbox may have impeccable curbside appeal, only to be packed with inconsistent correspondence.

No one would accuse Zelda of an imperfect appearance. Indeed, Merriam-Webster is in talks with Tabby’s Place to procure the license to use Zelda’s image as the very definition of “perfection.”

But the Siameezish show-stopper knows a thing or two about inconsistency.

At 11:59, she’s affection incarnate, Grandma’s shortbread dipped in maple syrup, a letter from home with forty-two heart stickers — the fuzzy kind with googly eyes that make you smile uncontrollably.

At 12:03, she is the wrath behind every war that ever ravaged the realms, a white-hot supernova of a storm, a 55-gallon drum of pasta arrabiata (literally “angry pasta;” yes, your penne has rage-management issues), an armored tank of terror in all directions. 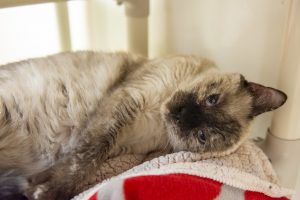 Zelda is offended by the very pretense of predictability.

Zelda is a legend in her own mind, committed to spreading the gospel of Good Zelda.

Zelda is on a continual quest that involves turning the map upside down every five minutes, and pulling out her crayons to draw new roads to travel and new rodents to wrestle and new friends to adore and occasionally attack.

Zelda’s adopters adore her exactly as she is.

And then there’s Pepperoni, the cat named for cured meat, gifted and cursed with an incurable urge to exude utterly everything, all at once. 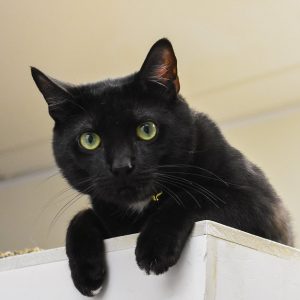 A living exclamation point, living life in all caps at all times, Pep was perhaps the most properly-named spiceball this side of Kielbasa Kingdom. He is a perfect circle of red-hot punch. He is a perfect friend to humans, cats, and stuffed animals. (OK, two out of three. Pep’s infamous stuffed animal was not available for comment and did not return calls requesting an interview for this piece.)

He is liquid energy, gelatinous goofiness, and the salty solid ground beneath your feet when you’re sad.

He flies and he flails and he snoozes. He sinks his entire, ebullient, bull-in-the-China-closet being into every single moment and relationship and breath he’s given. He’s a lot of cat. By most reasonable measurements, he’s too much. He’s never heard the word “consistent,” although he does kinda like the word “arrabiata” and would volunteer to pep up any pasta at all. 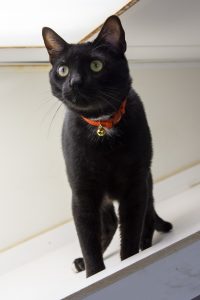 Pepperoni’s adopters adore him exactly as he is.

And so perhaps there’s hope for all of us.

Let’s leave “a consistent appearance” for flat grey mailboxes and frozen photographs. We’re meant to be mottled, you and me and the cats and orangutans and makers of angry pasta. Especially as we approach Valentine’s Day, there’s more than enough love for anyone who’s ever been too much or too little or too sloppy or sentimental or strange.

Even if your ears are odd, your attitudes are angry, and your spices smell slightly insane.

May your mailbox be full of hearts.

1 thought on “Valentitled, part I”