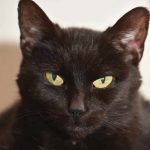 All of them live in my office.

We are speaking of cats, not voices in my head, and three is once again a magic number Casa Mia. Following Ginger‘s astonishing adoption, Bucca, Heather and I had a brief period of two-cat quiet before the new era dawned.

You have not yet been formally introduced to Denni on this blog, though you’re surely seen her funny fanged face elsewhere on our website. Denni arrived at Tabby’s Place as a sleek black sprite, with two terrific teeth forever Count Chocula-ing their way out of her mouth. Her face would make you laugh out loud with joy.

And then Dr. C had to go and ruin everything.

That’s right, I’m blaming Tabby’s Place’s eminent veterinarian. Fellow veterinary professionals Denise and Jess are none too innocent, either. They diagnosed Denni with painful dental disease, and then they took out the thing that made Denni the Denniest.

They de-dentrified Denni.
They de-fanged the phenomenon.

They also saved Denni from a world of pain, but we are selfish beasts who still talk about missing her fangs.

Meanwhile Denni, selfless and sylphlike, slipped into toothless life gracefully. Her sweetness earned her a spot on the Aged to Purrfection world tour. Her molassessy mellowness secured her a spot in Danielle’s office.

And then the movement of the planets had to go and ruin everything.

This time the blame falls squarely on the hairiest planet of all: Jupiter. You’d never guess it, but our woolly mammoth made trouble for Denni every chance she got. There was smacking. There was slapping. There were intergalactic collisions.

And there was a decision. Denni had to be delivered from the wrath of Jupiter. Deliverance awaited just two doors down, which brings us back to Casa Mia.

Now, I’ve been a Denni devotee since day one. My first reaction, on hearing that Denni would by my office’s new denizen, was to hop up and down and flap my hands while squealing like a little girl. (I also do this when I see a full moon or someone brings me a Diet Coke or I hear Sucker on the radio. But I digress.)

My second reaction was to remember that Casa Mia is primarily Casa Bucca…and Bucca brooks no rivals.

C’mon, squealy-pants, you may say, hasn’t Bucca brooked Heather and Ginger and others with ease?

Certainly, I may respond. But Heather and Ginger and their predecessors had one crucial characteristic that Denni lacks: they didn’t try.

I do not mean, of course, that they did not try to be noble creatures who lived their best lives. Of course they did. But when it came to getting attention and affection, they did not try. At all.

Consider Heather, who has now been with me for over a year. Heather lives 89% of her life behind my computer monitor, cozy and quiet in a round bed. She solicits my attention 0% of the time. When I pet her, she looks at me with an expression that is half “HERE SHE GOES AGAIN IMMA DIE THIS TIME” and half “this is not as terrible as vegan cheese, but it’s close.” (Sometimes she purrs. I am convinced this is for my sake. “Poor putrid hideous human.”)

Heather is the girl in high school who wore exclusively flannel from the Young Men’s department at Target, never raised her hand, and continued walking in silence when boys asked her what her deal was. She was adorable and intelligent and awe-inspiring in her own way. But she didn’t try to get anyone’s attention.

Some might think she was stuck-up. They would be wrong. She was and is a rare creature. In some ways I admire her, wish I had a small fraction of her aloofness. She does not require external validation. She will never be seen going “hey, look at me!” while everyone awkwardly looks away. She does not try anyone’s nerves, and she does not try herself into a tangle of embarrassment.

Far more common are the Bucca’s among us, the Try Too Hards.

When I leave my office, whether on a six-month vacation to Slovenia or a six-second walk across the hall to the printer, Bucca will begin…to…scream.

Hers is not the dulcet sigh of a sweet soprano. Hers is not even the friendly “hey!” of a chum. Hers is the crackling, squawky, shamelessly desperate old-lady howl that is all her own, and it only rises in pitch and frequency as I walk back to the office where I belong. Bucca paces and trembles and tap dances behind the gate as she hollers, completely consumed by trying so very hard. I have been told that Bucca begins this routine as soon as she hears my footfall from the side hallway.

Bucca wants my attention, desperately. She is too hungry for hugs to be cool. She will not take no for an answer, but if no is the answer, she will simply try harder, howl louder, fall over herself and wear the biggest pinkest poof of a dress to the prom if that’s what it takes to get noticed.

(Bucca tries equally hard with other humans, but her efforts in their direction usually consist of disapproving screams and horrified, fast-flying punches from her declawed paws. But that’s another quirk for another post.)

And isn’t this what we do? We shriek and we sashay and we pretzel ourselves into unsolvable knots trying to convince someone or anyone or ourselves that we are worthy. Our drama is fed by fear, and no amount of reassurance gluts the beast.

Like any of us who will make fools of ourselves for love, Bucca can be a jealous friend. On the rare occasions when Ginger took steps in my direction, Bucca was quick to respond with hollers and hisses. When your soul’s vocation is to demand attention, you live in fear that it’s scarce stuff you must protect at all costs.

So what would happen when we introduced the defanged, delightful, social and sweet Denni Casa Bucca? Only time would tell.

And I’ll tell you next week.

1 thought on “Trying times, part I”