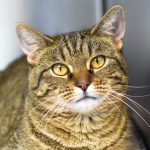 Plunk it onto a plug of a neck; attach a body shaped like a sausage (more accurately, a “saw-seech,” per my grandmother). Pin on four stubby legs. Expand belly repeatedly.

Congratulations: you have built yourself one Sadie.

She’s the cat crafted like a dachshund. She’s the sweetie who’s been to many smorgasbords. She’s the tabby tank with tiny legs and tremendous “it-ness,” that indescribable factor that makes her everything good.

I’m not sure how Sadie got her name in the Life Before Tabby’s Place, but it surely wasn’t a nod to the Sadie Hawkins Dance. (I have no idea if such a dance exists anywhere other than old Saved by the Bell reruns and such — we thankfully never had one in my school — but the idea is that girls ask guys rather than the other way around. Revolutionary, I know.)

Such a standout as Sadie would surely never need to extend her own invitation to a cat, or a human, or an earthworm, or any living creature. Her very fabulousness is an invitation, living and breathing and purring and getting goofy on gooooood catnip.

Sadie is so infinitely adore-able that she need not proclaim her charms. Right? 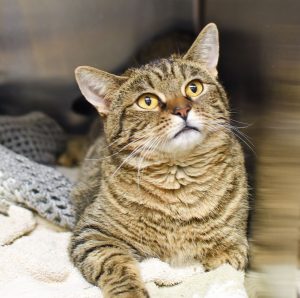 It seems even Sadie’s inexhaustible awesomeness was not enough to keep her in the favor of her family. It took serious sleuthing to sort out, but it seems Sadie was surrendered by the humans who once held her closest. When we met her as a local stray, she had a microchip (huzzah!)…which tracked back to a woman who had surrendered her (harrumph!) to a man who gave her to his parents, who accidentally let her escape outside. When we contacted the number associated with the microchip, we received the saddest answer you can imagine: no one in this cast of characters wanted Sadie.

Nothing she could do or be could save her; they’d made up their minds, made her an exile from their love.

I always wonder, in cases like these, if the cats wonder what happened. They can’t know why their lives changed so quickly, but they can’t ignore the fact that they did. I rest easy trusting that no cat contemplates whether or not she did something wrong, or how she could have been good enough to keep her life afloat. Such neuroses are our own species’ specialty. But still, I wonder what they wonder. 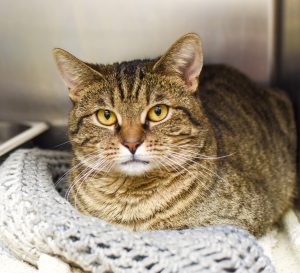 I need not worry over how long they wonder — at least, not in the case of Sadie. Like so many discarded cats before her, she’s made quick work of “getting over it” — or, more accurately, getting into her new life, in all its sweet strangeness. Sadie is too stout for sadness, too round to regret anything. If she looks densely-packed, it’s only because she’s bursting and brimming with the hope that comes from knowing her own worth.

She is a creation crafted of pure perfection.

So there will be no anxious invitations to Sadie’s dance, no worried turns in front of the mirror. She’s not evaluating herself, her value, her appeal to you or me or anyone.

She is the dance itself. And we are the wonderstruck.

Epilogues: April 2019
Epilogues: March 2019
Twitchy woman
All in this together
Ashes