Donate
100 cats and a mouse 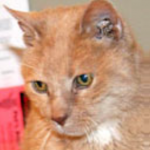 It was a few mice short.

It was missing the half of a lizard we once found in Solarium B.

But otherwise, it was astonishingly close.

“It” shall be revealed momentarily. But first, a small revelation.

It turns out I have been preparing for Tabby’s Place my entire life.

If I’m feeling nostalgic, it may be because we just passed the fifteenth anniversary of the first time I stepped foot on the planet known as Tabby’s Place.* I was a wobbly wee sapling, not entirely sure who I was, not expecting that “who I am” would turn out to be inexplicably, jubilantly entwined with this place and its wonderbeasts of two species. I was only here to adopt a cat.

That cat would be the great and venerable Dibbles, still making merry at age sixteen, the gentlest and sweetest being who has ever trod this earth. (This is a scientifically verifiable fact, with apologies to Mr. Rogers, Mother Teresa, and everyone’s grandma.)**

But on the way to Dibbles, the entire world changed.

As I walked into the building, I was first greeted by one Gordy, a wizened husk of a gingerbread cat with cloudy eyes and a soul so large it announced itself from ten feet away. I gasped in joy. I bent to pet this survivor of the Precambrian Age. I looked up and saw one Jonathan. He introduced me properly to Gordy and made some sort of smart remark. I laughed, and he made many more smart remarks, and introduced me to many more peculiar splendorcats, and the world began to change.

I had no idea that I was meeting one of my future best friends and heroes, my bossman-to-be. I only knew I was enchanted and elated and smitten and snockered with this place, and these kind, peculiar people, and soon I was taking home a striped shimmering cat with a meow that could be heard from Ulaanbataar. Jonathan’s parting words that day were, “You know, Dibbles is the single loudest cat we’ve ever had at Tabby’s Place. I hope you’re prepared.”

I was. But I wasn’t prepared for the fact that Tabby’s Place and I had only just begun.

A year later, against all expectations and indications and plans for vocations, I was back, this time for a job interview. I left with a second cat (the eminent and imperial Pippa) and a job and, unbeknownst to my head that knewest so little, the greatest calling I’d never known was singing my name.

And now we shall return to the topic of “it.”

The poster was called “One Hundred Cats and a Mouse.”

The cats were the wildest squadron of weirdos you never dared to dream. There were mammoth ones and sleek ones, pinwheel-eyed ones and bow-tied ones, pretty and prissy and muscular and merry and more than a little insane in all the right ways. They smiled widely and wildly and made you believe that life was far stranger and sweeter and more sacred than any bad news could ever burst. They were a hundred strong; they were all different; they were exquisite in their uniqueness and their unabashed-freakness and their cacophony of colors and grins.

I loved them so much, my Mom bought them for me, and every day for a decade, they were my first sight when I yawned awake.

Years went by, and life got loud, and I forgot about the poster. But one day a few years ago, my sainted Mom, who knowest much more than I ever will, remarked, “You realize, you grew up to live in your poster.”

Sometimes the future likes to wink back into the past, stringing together mysteries that we can only later recognize as fairy lights and breadcrumb trails home. Looking back, the Hundred Cats and a Mouse were merely one of a million million hints that Tabby’s Place was my future forever home.

I was not only the child who gazed at the poster; I was the oddity only child who had catalogs of my imaginary friends, dozens strong, neatly listed by name and age and occupation in spiral notebooks. There were people and animals and uniques and freaks and companions for my lovely, lonely journey. The cacophony was my comfort. The community was as real as it was imaginary. (They were also collectively known as the International House of Baked Beans, although that’s probably not relevant to anyone except any psychiatrists and/or FBI agents who may be developing a profile.)

They were a foretaste of heaven, a foretaste of Tabby’s Place, a whirling dream of a realm where all creatures would be embraced exactly as they are, a grace-mountain of tenderness that could never be lost.

Gordy was there. Webster, too, and Bucca, and Grady, Lemon and Queen, Flora and Pancake, Mary and Mozzarella, Jonathan and Brother George and Dr. Fantastic and all the saints and angels who have walked through these doors, plus all those yet to come.

The dream is real, kittens, and the hundred cats are here for all of us. Everything we’ve yearned for but dare not speak — the home that can’t be lost, the bonds that can’t be bollocksed up, the love that can’t be pushed away — is bedrock truth. It’s not just Tabby’s Place, of course — not even a place so holy as this can bear the full weight of that. But Tabby’s Place is a living parable, and the story is ours to inhabit, saplings and weary wizened Precambrians and all.

We have all been preparing for this our entire lives. We’re not done yet.

So take heart: the greatest things that will ever happen to you have yet to happen to you. You couldn’t predict them. Don’t try. They’re winking and grinning and shimmering at you even now, a hundred strong and more.

*HA HA HA I MADE A FUNNY. If I’m feeling nostalgic, it’s because there’s breath in my body. This is what I do.

**Irrelevant but important: Dibbles shares his birthday with Levon Helm, and he has, in fact, assisted me in taking a load off my nostalgic neurotic mind every day for fifteen years.