You’re not imagining it. Today the world is a little less colorful, less ragged, less funny.

Two geriatric grey giants have departed, taking a kaleidoscope of colors with them. 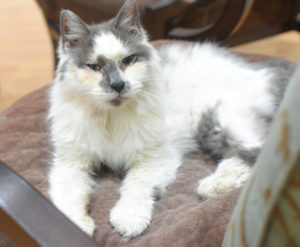 When I was growing up, my exuberant father used to sing this little ditty:

We might be ragged and funny;
We might not have any money;
But we’ll get along,
Singing our song,
Side by side. 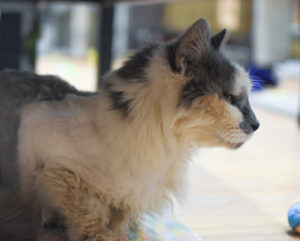 If ever a cat could be described as “ragged,” it would be Hobo. With a musty mist of grey-and-white wisps heckling out in all directions, eyes that never fully awakened from permaslumber, and a speed that made snails feel better about themselves, Hobo was a visual feast of messy, mud-paced magic.

Ragged? Righteously so, but without a sliver of jaggedness in body or spirit. The liquid, languid old clown was everyone’s friend, gentle and egoless, greedy for nothing more than to glunk his grey goodness into your lap. Extra points if you brought a squadron of White Castle sliders, but not necessary. 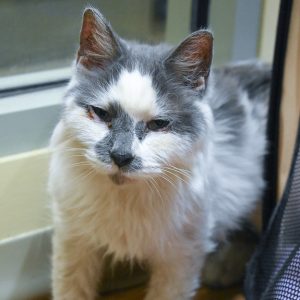 Crowning Hobo’s rumpled ragamuffinry was a halo of peace. This was not the peace of a perfect life, but the sturdy kind, a brass halo that could sustain life’s bite marks. Hobo quietly, unselfconsciously bore the weight of hyperthyroidism, cardiac issues galore, chronic herpes (ergo those goopy, sleepy eyes), and lymphoma.

Hobo was the embodiment of ragged.
Hobo was unshakably rugged.
Hobo healed us all, in a howling, unfunny year.

And then Hobo had to leave us, snailing on into eternity after one last battle with kidney failure. 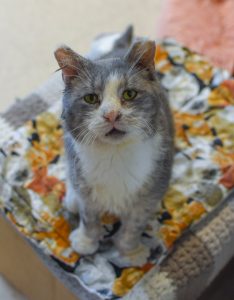 Before we had time to pull the rags around our shivering hearts, another vagabond made it known that he was making haste for heaven. Just down the hall from Hobo’s Lobby (and make no mistake: it was Hobo’s Lobby), Jonathan’s office mate, the littlest big cheese, was stretching towards the veil.

I’m speaking, of course, of Mozzarella, the cat who came and mewed massively and conquered every heart this side of Wisconsin. With apologies to all the cheddars that have ever considered themselves sharp, it was a softer, funnier formaggio that deserves all the awards and accolades and peculiar hats.

Like Hobo, Mozz was a grizzled grey gumbo of years and goop, slobbery and sloppy and all the more spectacular for his smudges. His face was never clean; his health was never good; his kindness was never less than meteoric, megawatt, all gears fully engaged for great grey good. 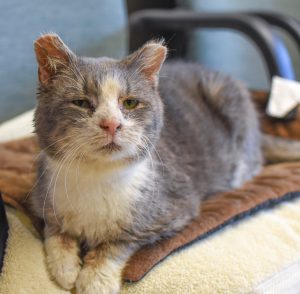 This is a difficult image to convey, and photos don’t do it justice. But trust me when I tell you: this was a cat who quite consciously wanted you to feel his kindness. He fixed his little green peepers on you, focusing with the fire of all the dragons and phoenixes, and he willed you to feel cherished. I am certain that he intended this. I am certain that he knew his vocation. 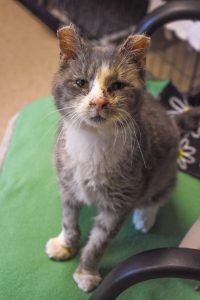 I am certain that he succeeded. Masterfully. In the midst of cancer and extreme old age, diabetes and FIV and a weariness he never discussed (Mozz always insisted the focus be on you), Mozzarella made you remember your own worth, buried beneath moss and grief and grey years of ragged secrets.

Hobo and Mozz. Ragged and funny. So very, very funny.

In the midst of anchoring us in love, these wounded healers made us laugh. Oh my stars, did they make us laugh. It’s one thing to be just “ragged,” but to be “ragged and funny” is a gift given only to saints and angels and great geriatric grey giants. Hobo and Mozz were the grandest of goofballs, and I imagine they’re willing us to laugh again even now, especially now.

Which reminds me of another constantly-repeated saying of my Dad’s: “We’ll weather the blast and land at last on Canaan’s happy shore.”

This day, this week, this year has blasted us with sorrows and uncertainties beyond our own capacities to handle. But we are not left to our own capacities. We are side by side with the ragged, the funny, the healers and heroes whose very wounds make them strong. We are here together. We will get where we’re going.

Even if they’ve left our sight, the two great geriatric grey giants are with us still.

Good thing, because we need them.

We’ll get along, singing our song.