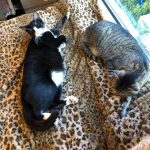 It is universally known that Max was a king among cats.

So it’s only right that it takes a full battalion of “normal” felines to replace him.

Note #1: I am aware that there are no “normal” felines, and there is certainly no “replacing” Max.

Note #2: Sammy Rosenberg is not entirely aware of those facts.

Sammy, being a cat, considers herself — rightly — to be a uniquely spectacular individual. She is in full possession of herself and her power and her self-confidence, as well as all three window boxes in the Kingdom of the Community Room.

It was only right that a cat of Sammy’s caliber kept company with the greatest of gentlemen, our iconic, immortal Max. For years they shared a bond that extended to no others. Sammy will go down in history for being the sole cat Max could love and permit to live.

To be loved by Max was to be great indeed. Sammy was loved large; she never forgot.

And so, following Max’s descent into madness, illness, and then a long sweet reprieve in his private suite, Sammy walked alone.

There would be no replacement.
There was no equal greatness.
To own one’s aloneness is truer than walking with those who will never know you.

Sammy was surrounded by cats in the Community Room. You and I and all the Avengers and Targaryens and Jonas Brothers know that these were great cats, matchless cats, magnificent cats worthy of all laud and honor.

Good things come to those who wait, and Sammy’s “better” manifested in the form of a tuxedo man-harem.

One black-and-white fella would not suffice.
Two would be cutting it close.

So Sammy saw fit to surround herself, at all times, with no fewer than three sharp-dressed men.

Suddenly, there was no approaching Sammy’s throne without first paying homage to her colorless guard: Tux, Puzzle and Hunts surrounded their queen at all times, black and white and tabby legs all cattywampus in the window, sun playing with their color contrasts and palette of personalities.

Sammy was loved large once again.

Since Sammy’s selection of her right hand men, little Hunts has been adopted. This creates a vacancy in the window boxes, a void gasping for greatness.

Frankly, it may be years before Sammy selects a suitable replacement.

Meantime, we’ll call upon our queen and her coterie with full-color fanfare. Max would surely be proud.