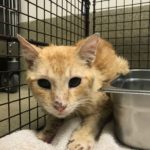 The year is young.

You and I are not.

This is no cause for concern.

We are, in the immortal words of They Might Be Giants, older than we’ve ever been (and now we’re even older).

It can be the fire (warm, not blistery) beneath our feet that sends us skyward with new grit and energy, like the comets we forgot we were.

It can’t make us five or seventeen or forty-nine again.

It can provide thrilling sales on white towels.

Good news: we wouldn’t want it to do that.

Nor would Tabby’s Place’s newest Old.

It’s no secret that we adore the elderly Casa Tabby. Kittens are irresistible, but give us a 17-year-old war horse with a heart that sings peace, and we’re so far over the moon, NASA will never find us.

If ever a single cat epitomized Old, it would be Everest. He’s circus peanut-orange, but you almost get the impression he was once white, and has been stained by time like a tea towel. (Which means he is more valuable. We can charge more for him on Etsy.)

His feet are pocked with tiny pain points from serious frostbite. He somehow made it to age ~740 without being neutered, which means he is somewhat angry with humanity, although his platoon of painful teeth aren’t helping in that area, either. (He also keeps insisting that we call him Robert Redford, but that’s another story.)

He is currently living in a “feral recovery cage,” where we generally store our community cats while they’re coming back from Anesthesia City. He’s not wild about these accommodations, and we’re not wild about having to accommodate him thusly, but it will keep him from hurting his feet even more.

Everest is the epitome of a mess.

Everest enters this New Year not entirely new. No deep clean, no fitness resolution, no Annual Purging Of The Grody Tupperware, can undo what time has done to this creature.

Everest is not too old.

The story could end neatly enough there, but Everest didn’t arrive alone. On the same day we welcomed this caramel-colored centenarian, we opened our doors to Tippy.

We knew instantly that Tippy was already on her way across the great wide river. She had what was almost certainly a severe case of erosive squamous cell carcinoma on her nose, with a dollop of hyperthyroidism in a body that had probably survived that other pandemic (no, not 1918; 1346). She carried her many years in a body weighing all of 3.6 pounds. Time had not been kind; time, now, would be short.

But Tippy was not too old.

One of our staff members, an absolute legend who shall remain anonymous except to say that her name is Drew and she is one of my heroes, took Tippy into her home. She loved her with the mercies of several centuries. Whatever roads had taken Tippy to us, they were repaved in gold in her final days. If years had taught her that she was disposable and alone, mere days were still strong enough to untie those lies. Tippy left this world confident that she was one thing above all else: cherished.

And a New Year is, in the end, really just a symbol of the new chance we’re given every day, every hour, every minute.

We’re all feeling our age, but we can feel good — nay, fabulous — about it.

You’re not too old, and neither am I, not as long as we hang onto each other.

Now if you’ll excuse me, I’m about to tell an angry orange cat that, yes, he’s more Redford in The Sting than Redford in All Is Lost.

Because it isn’t. Not for any of us. Onward, kittens of all ages.