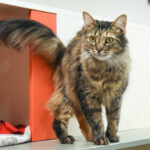 We’re a sudsy sink of sponges at Tabby’s Place, and we sop up each other’s feelings like it’s our job.

Fortunately for our spongy hearts, we’re surrounded by cats who feel fabulous. 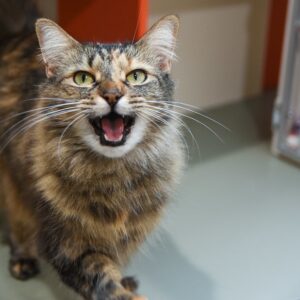 I’ve heard it said that, if being around someone consistently makes you feel a certain emotion, that’s likely what they’re feeling. This is surely all the truer if you’re the sensitive sort of sponge-cake who reads this blog.

If you’re always chewing the inside of your lip around your nephew, that’s probably because he’s a nervous wreck.

If you’re a little more excited about life after seeing your best friend, that’s probably because she’s hopeful.

If you want to scramble up the wall like a spider whilst throwing meat nuggets and screaming “FREE YOUR MIND!” after visiting Nemo, that’s likely because he’s an anarchist. (This is, in the case of Nemo, an emotion.)

If you’re suddenly consumed with the desire to form a band called Cheese Whizzard and the Blizzards after meeting Gator, that’s certainly because he’s a genius at the peak of his powers. 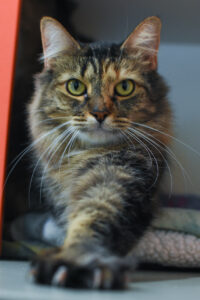 Miriel was maned from the moment she was born, an angel in a wreath of autumn leaves. Perched inside a pompom, petals flaring in all directions, she was too distracted by her own fluff to pay attention in etiquette class.

So you can’t blame her for missing fluffy lessons like: Don’t blaze too brazenly. Wear sensible pantsuits to job interviews. Don’t assume you have a seat at the table. Stay beige. Above all else, never let on if you like yourself. How will everyone else feel if you’re out there liking yourself like some kind of lunatic?

Miriel can’t answer that, but she can answer this: if she’s out there loving herself like the sanest lioness on the savanna, she just might save the world. And Miriel is up to nothing less than saving the world.

It is quite a quest for a cat whose very existence was so recently in question. In addition to breathtaking beauty, a voice like Julie Andrews, and fluency in six languages (she’s working on Ugaritic), Miriel happens to have feline leukemia virus (FeLV).

The most feared condition in the feline kingdom, FeLV puts most cats on the euthanasia list rather than the Who’s Who of Winning Wonders. But Miriel fears nothing, least of all her own fireworks. Few cats have ever seemed so unsurprised to land at Tabby’s Place. “Ah! Of course. Let my diamond season begin.” 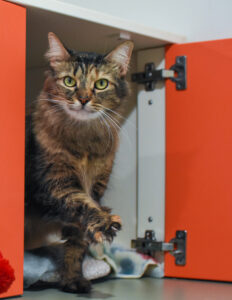 Buoyant and neon, she blazed her path as though it had been charted since before she was claimed, named, or maned.

And she’s been reigning in fame ever since.

She hasn’t forgotten. She just never forgot to belong to herself, to sing songs to herself, and to feel strongly about herself.

And she’s been reminding us ever since.

Slip into Miriel’s palace, and she’ll sweep up to you like Auntie Mame, practically taking you by the arm and wrapping her bright orange feather boa around your neck. 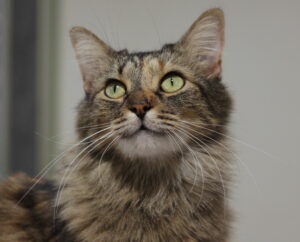 She is loud — her colors, her confidence, the voice vaulting out of that always-open mouth — and wishes the same for you.

She is proud — She made that curmudgeony volunteer smile! She has toes that bend like macaronis! she has a tail that looks like a party! She has life by the tail like a personal comet! She has a thesis about personal pan pizzas! — and wishes the same for everyone.

She is allowed — allowed to feel special, allowed to twine around your legs like liquid flame, allowed to adore you, allowed to announce both her own glory and yours until she runs out of breath, which is in no danger of happening this particular century.

She is Iris Apfel. She is every Sousa march simultaneously. She is the end-zone dance. She is the twelve-year-old who just beat his dad at Mario Kart. She is the lioness, and the lion, and the sun over the Sahara.

And when she shines on you, you don’t feel littler or less — you feel, frankly, kinda fine about yourself. 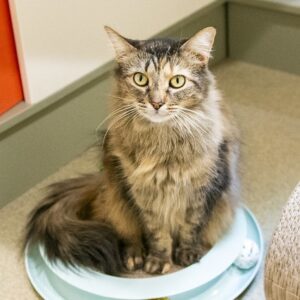 You feel like liking oneself just might be the most beautiful boa, the most leonine mane, the main way to make a way through the mystery.

There is so much mystery.

Viruses and tyrants and recessions and ravioli shortages stalk us all, and we can’t control the weather.

Our spongy hearts will be wrung, and some days we think we’ll drown in each other’s tears, bound for worse-than-no-place.

And then we hear the roar. We see the flame-mane. And we ask: how will everyone feel when Miriel feels fabulous?

We’ll feel okay about ourselves, and about each other, and about this beige world that needs our neon.

And then we’ll declare it diamond season, and pass the sponge cake.