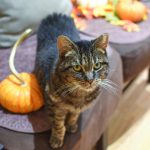 The first thing that comes to mind when thinking about elephants is not usually pumpkins.

That is, unless you’re thinking about a zoo, specifically, the Oregon Zoo in Portland.

There, they provide their pachyderms with pumpkins perennially, well at least since 1999, for the Annual Squishing of the Squash. That is to say, when the gourds are great, the zoo keepers give great big gourds to great big creatures for great big fun (and maybe a little bit for nutrition). 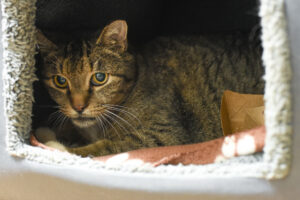 This isn’t a thing that happens at Tabby’s Place. I mean, if cats were really into pumpkins, sure, but no (okay, admittedly, there is at least one hilarious exception to this neither hard nor fast rule).

But, the only pumpkins we regularly see at the sanctuary extraordinaire are 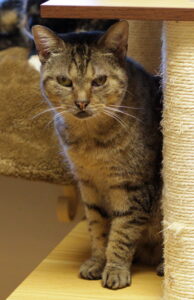 1) pumpkin costumes, into which cooperative cats are stuffed for photo ops, and 2) adorable stuffed pumpkins that the cats can play with. (I imagine a meta version of this: an adorably pumpkin-costumed cat batting around a tiny stuffed pumpkin-ball. Bets on Boobalah to play along!)

While autumn is just the right time of year in much of the US for assorted actual squashes to make their appearance (with some even getting stuffed), this year, at Tabby’s Place, the squashes have been outdone and over shone by a petite picking of peppers. The addition of Habanero and Poblano has added zip, zing, and ZOWIE to the offices of Development and of Operations. For now, it seems like these poppers are sticking to their namesakes, with Habanero bringing a bit more heat to the table while Poblano is providing a sweeter punch. 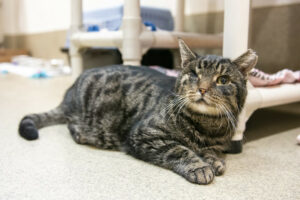 But, it isn’t only food-based treats that have dropped like so many rustling leaves into Tabby’s Place this fall. Viktor, for one, has gracefully settled into Suite A. His victorious capturing of hearts has barely begun, but it is certain to be exceedingly thorough. Admittedly, as one of Viktor’s “victims,” it’s not a bad way to go. 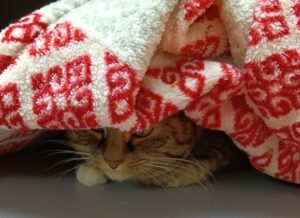 Meanwhile, another conquering hero-in-the-making is shy Alora. For volunteers and staff, as with many cat lovers, the cats that hide the most are those we find most tantalizing. They call to something within us that makes us want to soothe and comfort them. For now, Alora is creating her own soft landing following a tumultuous change of life. When she emerges more fully, she will surely be ready to gobble up all the love we are able to serve. Until then, she is easily tempted by treats and is, happily, responsive to all the pets. 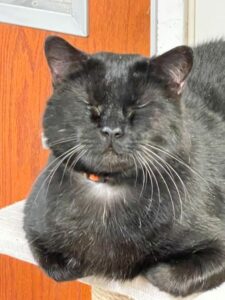 Although the pair of peppers as well as Viktor and Alora are all in the middle of an autumn not of their own making, each one is making their own way toward settling into the Tabby’s Place way, i.e. any way at all that works for each of them.

My mom would lovingly call each one of these cats a “pumpkin-puss-pot” (apparently, I am one too, if 52 years is proof enough). For these pussy cats, though, it won’t be pie that fills their bellies or their hearts. They won’t be served stuffed zucchini. They won’t be portioned pumpkins galore (although there is a very special Pumpkin who recently arrived). And, the only Spaghetti around will be of the feline kind, not the squash kind.

But, they are – each and every one – our precious gourds, perennially and perpetually, in every season.