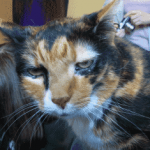 There are no sub-spectacular cats at Tabby’s Place – or anywhere else.

But even among a species of stars, Cali stood apart. We’ve loved and lost one of the great ones.

Many cat-lovers attest to the phenomenon of “tortitude,” or Real Housecats of New Jersey-style sass from calico cats. That theory is not without merit. Of the many calico and tortoiseshell cats we’ve cherished at Tabby’s Place, the majority – okay, the vast majority – have, indeed, lived up to the “diva” reputation.

But for every stereotype, there’s a mythbuster. Cali was content to quietly disprove all assumptions about calicos (and torties – since her own coloring kind of straddled the line between the two). As one volunteer put it, Cali “will only let ya pet her for about eight hours. Then she’ll turn around so you can get the other side.” If Cali had any “attitude,” it was the attitude of 100% pure affection. Other cats could only dream of bearing the title “lap cat” as deservingly as Cali.

All this sweetness was especially tender coming from a cat with every reason for a rotten attitude. Cali and her sister Kelly had been unceremoniously left behind in an apartment. Already pushing seniorhood, the 12-year-old girls faced grim possibilities at most shelters. But, through a set of blessed circumstances, they were Tabby’s Place-bound. That was over five years ago.

It’s at this point in the story that another “great one” must be mentioned. Cali and Kelly’s rescuer painted himself as nothing more than their humble “delivery man,” bringing them from point A to point B TP. But this hero – let’s call him Brother George – was no ordinary human bean. (Even as I type that, I can hear him protesting. You’re very kind, Angela, but you think too highly of me.)

Kelly was adopted swiftly – a happy ending for a hard-luck cat. Cali also landed an adopter’s affections…but, shortly before adoption day, Cali was diagnosed with aggressive GI lymphoma. Heartbroken, Cali’s almost-family decided it would be best to let Cali finish her short life at Tabby’s Place. We didn’t even list Cali among our sponsorable Special Needs cats, for fear she would last only a few weeks. We moved her out to the lobby, to moosh her and regale her with junk food in her final days.

Cali, however, never got the memo about her cancer. When, three years later, Cali was not only still alive but chubbier, happier and healthier than ever before, our vet team officially declared that moldy old cancer diagnosis to have been an error. (As a side note, this is no reflection on the specialists who’d diagnosed Cali: GI lymphoma is notoriously tough to diagnose definitively.) Of course, you can’t “demote” a lobby cat once she’s landed this primo real estate, so our healthy old girl continued to reign from the Tabby’s Place reception desk for years. When she finally did “retire” to Adoption Room #3 after repeatedly contracting ringworm in the lobby, Cali seemed ready for the sunshine and quiet pace of this Little Old Ladies’ Suite.

A cherished constant in Cali’s adventures was her first hero, Brother George. He visited Cali, “his girl,” dozens – if not hundreds – of times over those five years. And, as much as Cali loved everyone (everyone), there was a different sparkle in her golden eyes when Brother George came around. Even into her late teens, she’d leap like a kitten into his lap, bounding across the Little Old Ladies’ suite to love on him. And he on her.

Brother George loved all the cats. He gave his life, his love and his early-morning routine (2+ hours of feeding and medicating every day) to the half-dozen or more who shared his home at any given time. Into his seventies, Brother George was one of the most energetic rescuers I’ve ever been blessed to meet. You’ll never meet a more-loved, better-cared-for cat or dog than his menagerie. George loved the Tabby’s Place cats generously, lavishing his goodness on them in word and deed (and, I must add, considering Webster one of his special favorites).

In all this goodness, Brother George was motivated by the love and grace of God, the Creator he thanked constantly for putting animals in his life. Brother George had a wise and childlike wonder at all of creation. A brilliant man with a curious mind, he would bring his astronomy magazines to Tabby’s Place to share with me, marveling at how “the heavens declare the glory of God.” He was equally at home talking about how best to medicate a cat, where to see the most beautiful New Jersey fall foliage, and why Mother Angelica and Benedict Groeschel were his heroes. George had a heart as big as the sky. And so it was fitting that Cali was forever his girl.

It seemed that Cali and Brother George would both be with us forever. So, when Cali was diagnosed with suddenly-severe kidney disease this spring, I imagined – foolishly? hopefully? – that she’d shrug it off as she had her “cancer.” So what that she was seventeen now, and looking frail? So what that, sometimes, she even declined affection now? She’d be fine. She’d be fine, SHE WOULD BE FINE.

Mercifully, Cali’s final battle was brief and without much pain. She faded quickly, and it was unmistakeable when her time had come. Weeping and thanking God for the gift of this cat, staff and volunteers surrounded her to love on her as she left this earth.

But one of Cali’s friends – her oldest and dearest friend – was absent. Even as we said farewell to Cali, I had a knot in my stomach over the fact that I’d been unable to reach Brother George. We’d always touched base every month or so, and he’d been anxious about Cali’s failing health. So, when I couldn’t reach him for weeks on end…

I don’t believe for a second that there’s such a thing as “coincidence.” Call it Providence or simply God’s way of remaining anonymous. It is no accident that Cali should just barely beat her best friend to Heaven. Amidst the sea of grateful cats and dogs who greeted Brother George in God’s Kingdom, I know that a certain calico leapt like a kitten into his lap, bounding across the Little Old Ladies’ suite to love on him. And he on her.

Cali and George, until we meet again…thank you for giving us glimpses of the very love of God.

PS: Thanks to those readers who have e-mailed me to ask if we’ll be paying tribute to the too-many Tabby’s Place cats we’ve lost recently. The answer is yes. Look for future posts honoring Polly, Lola, Mr. Grey and Matilda in this little corner of the internet.

Memento vive
They who must be obeyed
Bubbles and old ladies
Triumph of the ‘Weez
Webster update: love grows