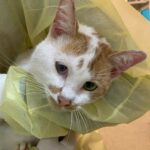 You, the radiant creature reading these words, may have any number of hats or titles or vocations or stations.

You may be a Dunkin’ Donuts manager.

You may be the sultan of Brunei.

You may be a grandpop.

You may sell yellow legal pads.

You may be skimming this on your phone between lunch and gym.

But whatever pays your bills or fills your hours, you are — of this I am certain, so please don’t protest, you radiant creature — employed in “the helping professions.” 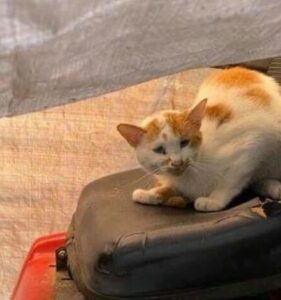 Traditionally corralled to the callings of counselors and chaplains and nurses and other paid nurturers, “the helping professions” are as vast as the persons and creatures who profess their love through their lives. Titled or timid, official or intimate, the helping professionals are stationed everywhere one heart unfurls itself for another.

Your heart goes from tightly-wrapped tortellini to stretching spaghetti at the faintest sound of a fearful mew. One moment, you’re enfolded in yourself. The next, a single glimpse of a shivering stranger transfigures you into warmth and welcome.

Yes: you, reader of these words and lover of these cats, are very much engaged in the helping professions.

Don’t argue with me.

OK, feel free to argue with me. I’m kind of a gigantic spindly marshmallow. 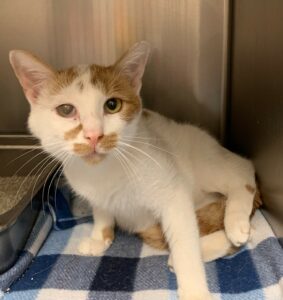 But don’t argue with Drifter.

Even if you make a habit of arguing with cats (which is ill-advised, whether you’re a sultan or a steamboat captain or a street sweeper), take a break from that buffoonish business when it comes to this tiny-eyed traveler.

Drifter may gaze upon the world through eyes the size of peas, but make no mistake: his vision is vast.

How else to explain the way he — all bones and angles, bad luck and Buick-sized ears — knew where the invisible doors are located?

You know the invisible doors.

More than once, you’ve been on the inside-side of them.

Drifter rode the lonely rails for months or more, poking his peculiarly-shaped (which is to say “perfect”) head into seeming vacancies, seeking the right fit. But time and time again, apparent openings slammed shut, with little more than a hastily-pasted sign in the window: “No Long-Eared Freaky Cats Need Apply.”

But Drifter, being fully and irrevocably Cat, was undaunted. (Try to think of a single daunted cat in the history of felinity. I’ll wait.) 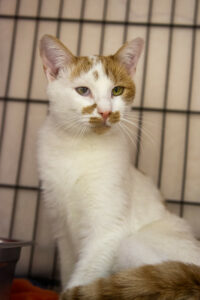 Undaunted by a leg injury that slowed him down and left him limpy.

Undaunted by the sight of his train dangling off its track.

Cats, rich in derring-do and saintly stubbornness, seldom yield to the limits of what our big, bumbling eyes can see. And so Drifter’s pea-petite peepers kept looking, working, tracking the hope that hides like a baby bunny and is twice as precious.

Being fully cat, Drifter was fully employed in his own helping profession.

Among his many titles were Hopemaester and Goodchaser and Engineer With Ears To Hear.

Amid the noise and clatter, the popcorn and profanity and profundity and perplexity, Drifter heard the sounds that set the world aright.

What his interplanetary ears could hear, above the honking and hooting and hollow cries that “all is lost,” was the sound of the helpers. 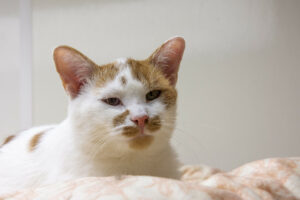 Somewhere in the vicinity of the world’s largest model railroad museum and “miniature wonderland” (no, I am not making this up, and yes, New Jersey has its PhD in strangeness and splendor), Drifter danced upon the doors that sultans and scholars and stock-car drivers would never see.

He heard the joyous music and felt the hot, holy hearthlight of kindness.

And so he hoped forward and limped forward, and on the sheer strength of his faith in gritty goodness, he found them.

So many of them.

One after the next, the helpers appeared like stars in the sky. A ragged, glorious constellation of compassionates and compatriots took pity on Drifter, took up his cause, took their places on the stage of saving grace. 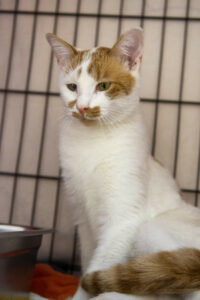 And, sure enough, one dauntless, pea-eyed prince with a wonky leg and the courage to keep hoping, hobbled his way home.

If you were to poll the various human beings involved in Drifter’s rescue, they would, one and all, pooh-pooh any use of the words “heroic” or “selfless” or “more brave and rad and radiant than all the James Bonds combined.” They would tell you that they’re just ordinary people, doing what any ordinary person would do. They might even deflect the accolades to the rumbly-tumbly team at Tabby’s Place, saying we’re the real helpers, we’re the ones who do the deeds and save the days and cradle the cavern-eared, pea-eyed, limpy-legged cats.

They certainly wouldn’t admit to being in the “helping professions.” 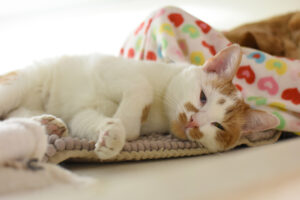 The whole railroad of radical rescuers, each playing their little and large role, was as essential as the enormous ears of the cat who dared to hear hope.

We are all, exquisitely, in this together.

Tabby’s Place can’t do it without you, whatever your role in this stubborn community of love. Individually, we are but lonely owls, outposts with flickering lights and torn-up track. But together, each helping and hoping, praying and persisting, we string together the stories that end in glory.

Drifter was never aimless — cats are as incapable of aimlessness as dauntedness — but he needed a league of helpers to confirm what every cat knows: a way will be made where no way appeared.

Love is always telling the truth.

And you don’t need Disney-character eyes to see that help is always on the way.

Let’s keep professing our love together, you radiant helpers.

Exquisitely unsurprising postscript: Drifter, of course, has been adopted.