Donate
The Delights of Dani 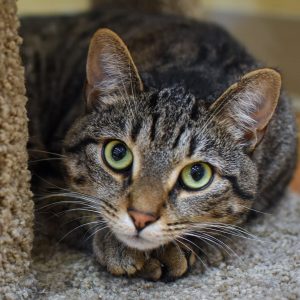 Dani is simply a delight to behold as she glides around our lobby. And glide she does–most of the time.

Scoots had just returned to Tabby’s Place after her extended foster stay at my house. The kittens were arriving and foster homes were necessary. That’s when I learned that Dani was on her way to Tabby’s Place from Catsbury Park. Would I foster another paralyzed cat, one who walks most of the time? 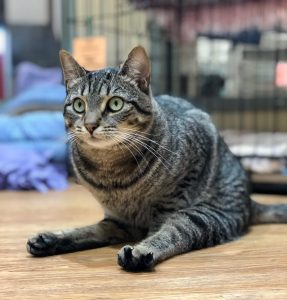 Yes, I was just as confused as you might be now. How does a paralyzed cat walk “most” of the time?

When Dani arrived she was sweet and scared. Her hind legs seemed very stiff. We witnessed her try to stand up and take a step, but she fell to her side almost immediately. The technical term for this pathology is paraparesis (the partial loss of motor control or partial paralysis most often of the lower limbs). Most of the time, Dani walks on all fours. Her four legged gait is unusual. Sometimes her hind legs move stiffly. Other times they sort of glide. And then, sometimes, she drags her hind end like June or Anka.

It took a few weeks for Dani’s full physical abilities and talents to manifest. She was clearly scared and nervous in her new surrounds. For the first week in my home she barely walked, and I was highly skeptical of her ability to do so for any extended time. Then one day I opened the door to her room (which she shared with my preteen) and there she was resting happily on the bed–about 2 feet off the ground! How on earth had she managed that? I placed her safely back on the ground before leaving the room, but the next time someone entered, she was back on the bed.

It seems that Dani is quite strong in her front end and she delights in climbing. Now that she has moved into the Tabby’s Place lobby, she has shunned the cushion of the often occupied human chairs and pulled herself to new heights–those of a four foot tall cat tree! Dani is not particularly graceful when she pulls herself up a cat tree, but her determination is without bounds. She is frequently found draped over a cat tree tier with her back end unsupported. It does not look particularly comfortable, but it brings Dani delight.

Once Dani established the twin bed as her preferred napping spot, her other abilities began to blossom. Dani is young and playful, and toes hidden under bedding are particularly delightful during the wee hours of the night. Without a human bed and human toes to chase, Dani can be found chasing moving enrichment toys in the lobby.

In my home, Dani brought me daily delights. She was all love and snuggles and wanted little more than to curl up in my lap after breakfast and settle for a long morning nap. She loves pets, scritches, brushing. All in all, Dani loves. She loves with every part of her that she can control. I encourage any visitors to our Lobby to take a moment to sit with Dani. This may mean sitting on the floor and inviting her over. This may mean picking her up and setting her in your lap on a chair for a good brush and pet. Dani may not initiate this interaction, but she delights in it. So take a few moments out of your day to experience the true delight that is Dani.

1 thought on “The Delights of Dani”