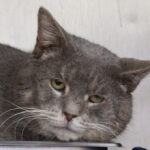 Love and pain will find us all, like a million Waldos befuddled under striped hats.

Love and pain will make us turn around and face ourselves.

Will we repudiate or rejoice?

Back in my seminary days, I had a beloved professor with a beloved phrase. Within seven minutes of discussing any topic (the Council of Nicaea, sweatpants without drawstrings, riced cauliflower, Amtrak), Dr. Earnest (as we shall call him) would find some detail causing him to exclaim, quite uncontrollably, “I repudiate that!”

(I can neither confirm nor deny that we, nerdy little rodents, secretly played Repudiation Bingo during class.)

Dr. Earnest was aghast an enormous percentage of the time. He was human haste in motion, anxious to disassociate himself from injustice and inconsistency and inhumanity and low-quality chocolate. He was beside himself so often, you could actually see him standing next to himself, interrogating himself, ever on the verge of repudiating even himself.

He must have been exhausted. 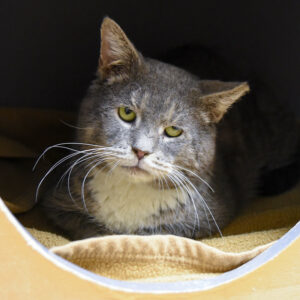 If you ran a DNA test on him, you can be sure he would be 0% feline.

But there’s hope even for Dr. Earnest (and overly earnest acolytes like yours truly). I can say this with confidence, because I have met one Rawlings Rosenberg.

If ever a creature had reason to repudiate, ’tis the grey cat with the head precisely the size of the Senate dome.

Rawlings was once someone’s, at least sort of. He and his eleven best feline friends rambled like happy hobos, one Woody Guthrie short of a “This Land is Your Land” singalong. They were unneutered but unconcerned, so long as they were able to keep hopping on the gravy train.

But one day, the conductor choo-choo-chose a different track.

Without warning, the cats’ caboose was cut loose. No more food; no more care; no more anything but the howl of hunger.

By the sheer gravitational force of his noggin, Rawlings attracted exactly the right angels. Where his AWOL conductor chose cowardice, tenacious tenderhearts took the better path, neutering all the hobos and even building them an insulated palace. 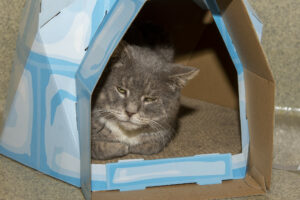 It sounds great. It was great. But Rawlings’ own body started taunting him to repudiate.

Despite his new caregivers’ best efforts (and here “best” is a meek and inadequate word), Rawlings was always sick. His smiley eyes squinted shut; his cavernous cheeks jiggled with coughs and sneezes; his upper respiratory infection upheld zero sense of decency, an injustice and an atrocity and an agonizing instance of Life’s Inhumanity To Cat.

The other hobos attempted to convene a war crimes tribunal, but it’s very hard to prosecute viruses, and everyone got too distracted trying to reach a quorum on the unrelated matter of The Redistribution of String Cheese.

But where you or I might have repudiated our own rebellious bodies, clawing our walls and our neighbors and our cruel histories, Rawlings got to work.

Rather than repudiate, he radiated.

Rather than disintegrate, he refused to discombobulate.

Rather than shout anathemas, he shone sweetness.

Sick and snotty and suspicious of supply-chain issues (how else to explain the fact that his cheeks, clearly capable of containing one metric ton of flounder, were not thusly stocked?), Rawlings rejoiced. 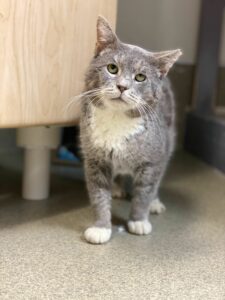 Every day, he greeted his caretakers with conquering cheer. Every day, he Hallmarked himself into a one-cat “Encouragement” card. Every day, he devoted himself to delighting his friends, reassuring them of their own whirling wonderfulness, making sure they felt their fabulosity full-strength.

And when the mysterious train of mercy brought Rawlings to Tabby’s Place, he unrolled the red carpet for us. The sooty Care Bear of a cat waves away all offers to rage against the past. The meek and righteous Rawlings flings the full force of his beefy being into the task of making us feel loved. We may be the ones who fixed his eye ookitude (entropion, if you’re looking for a diagnosis to repudiate) and treated his snorkling (an ongoing odyssey) and proffered many metric tons of fish mush (if not, yet, flounder).

But Rawlings is the healer here, the builder and the bard whose ballads were born to bless, not curse.

He is far too busy building cathedrals of kindness to bash the hovels of hurt.

And he knew what you and Dr. Earnest and I forget: there will always be hovels of hurt. Sure, there’s a time and a place to shake our tiny fists and ensure that everyone knows WE DO NOT APPROVE of such-and-such-a-thing. 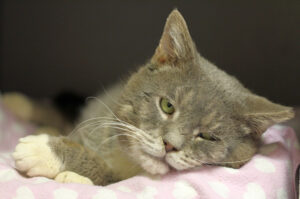 But repudiate in all directions, and you just might raze the whole realm.

Far better to roll up your sleeves — or pin back your jowltacular cheeks with a scrunchy, as the case may be — and make a world we can all appreciate.

Spend too much time beside yourself, and you just might stand alone.

Far better to come up beside your neighbors, raggedy knuckleheads though they are, and play Bingo and Boggle and Let’s All Sweetly Skritch Each Other’s Chins. (Hasbro, eat your heart out.)

Reasons to repudiate will always be with us. Rawlings dances with a diabetes diagnosis and stubborn upper respiratory unrighteousness that causes him discomfort every day; you and I will be slighted and smudged and underloved and underestimated and afflicted with ailments and tailgaters and Kid Rock muzak.

But far be it from us to curse the chaos when we can lift our lanterns.

Let’s build, not tear down.

I dare say it’s the cheekiest thing we, and one Jupiter-headed cat, can do.

1 thought on “Repudiated or combobulated”