Donate
Out from under the awning 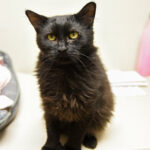 You can’t wait out your whole life under an awning waiting for the rain to end.

I suppose you could, but then you’d miss the ice cream man.

If you haven’t been properly introduced to Cole, let me be the first to say: Coley Moley, are you in for a treat.

You are in for a treat that trounces every tub of Triple Chocolate Chip ever churned.

You are in for a treat that transcends the sunset and the moonrise and the melody of yellow finches.

You are in for a treat that shall tickle and twist and tumble through your days like a thread of silver river.

I am understating the case considerably. 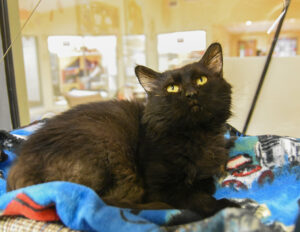 But like all treats worthy of the name, Cole is a confection coated in history and mystery and a certain layer of crust that can be carbon-dated to The Time Before Dirt. (This last quality is a trait perhaps not shared among all treats. You might want to pursue a refund on that encrustulated Snickers bar.)

Cole knows a lot about dirt and rain.

In a season somewhere between sadness and summer, a hard rain drenched his shaggy head. Cole languished despite being loved, clobbered by constipation (which would be an excellent name for a terrible band) and clinging to an unexplained hunger strike.

No one — and I have it on good authority that Cole was surrounded by many good and true ones — could understand. Was he advocating for the redistribution of poultry? Was he protesting on behalf of cats without crinkle-balls? Was he an emissary of Cottage Cheese Without Borders, that noblest of nonprofits, with its mission of repatriating feral cottage cheese to its proper home within feline bowls? 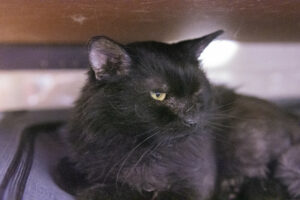 The good and true ones in Cole’s corner cried out on his behalf, and certain saints and angels heard their voices over the torrent. And so it was that Cole’s hitchhiker thumbs — for this polydactyl hath been blessed with more fingers than The International House of Chicken Sticks — shot out into the night. In the dark and the rain, the white tip of Cole’s tail blazed like a flare. The Tabby’s Place Treat Truck roared down the road, and Cole came in from the rain.

But you know and I know that, just when everything is technically swell, just when you’re warm and safe by objective standards, just when the crisis outside is over, the thunder within can really start to roll.

He rolled into his thoughts, and they were many. 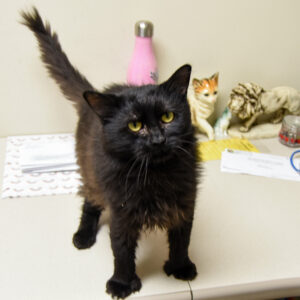 He rolled into his litter, encrusting his crust with crustables unspeakable. (He also rolled up letters to the editor and the emperor and the ice cream man himself protesting the fact that Tabby’s Place did not see fit to supply him with “Crustables,” a little-known cousin of Lunchables, made 100% of desiccated bison innards. I just write what they tell me, kittens.)

He shivered and yearned and yawned under the awning.

All the while, trucks full of treats trundled by. The music played. The maestros — which is to say my hearty coworkers — waved their batons. To no avail. The crusty cellist would not play. His weight dropped; single-teardrop emojis filled staff text messages; we wrote to the president and the president of Dairy Queen and the Pope and the ice cream man himself for guidance.

(Apropos of absolutely nothing: let the record state, in all-caps, thick-point, exclamation-points-with-hearts-for-dots Sharpie, that Baby believes himself to be the ice cream man. He would also like to take this opportunity to ask if you have ever noticed that he kind of looks like Paul Giamatti, but only when he plays good guys. QED.)

But when you’re under the awning, no outside advice can pull you out.

You have to see the sun with your own eyes.

You have to hear the yellow finches. 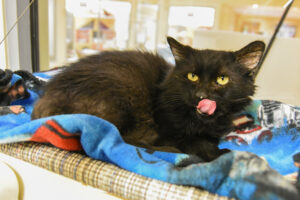 And if the sun won’t shine and the birds won’t sing, you have to fling yourself in love with the world as it is.

And so he did.

I would say it was “like flicking a switch,” but Cole is too organic and earthy an entity to compare to anything made by humans. No: it was more like crowning through a mountain of moss, simultaneously snagging every raindrop in a single butterfly net, leaping from an ice cream cake and shouting “GOOD MERCY, I AM A LIVING BEING!”

He hasn’t stopped emerging since that moment.

Cole came into his own the way we all come into the world: suddenly, sacredly, splendidly, and on our own mysterious steam. The shy, shrinking cat with patchy hair and no raincoat made the choice to be the rainbow — make that the rainbow sherbet — and the world has never been the same.

We see cats “bloom” all the time, of course. The road from shy to showboat is spangled with hundreds of paw prints at Tabby’s Place. But seldom is the sprint so fast, so victorious, blinding in its blinkered, baffling bliss.

But, as I said: Cole is a treat like no other. 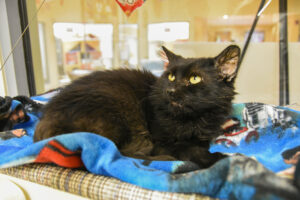 I was personally treated to a front-row seat to Cole’s personal shellacking of sadness. I can take zero credit for the fact that the Development Office was the scene for the big shebang, but it was here that Cole came crashing through the awning, clattering across the desk, and delighting in devotion (hugs! HUGS! OH MY LIVERWURST, HUGS!), and in destruction (NON-FOOD ITEMS ARE MY SECOND FAVORITE FOOD!), and in dizzying, delicious delectation upon life itself.

Frankly, it was a little overwhelming for one dunderheaded Development Director.

My office has a history of housing cats whose speed can be witnessed somewhere between “Jabba the Hutt” and “boulder.” Bucca was a shining exception, but for the most part, it’s the calm and the quiet and the painfully shy who put down roots Chez Development. I do mean roots, as in “walking optional.”

And then Cole came out from under the awning.

Cole flies. Cole tries, hard, at everything. (“I THINK I CAN MERGE MY FACE WITH YOUR FACE IN ONE SPLENDID SUPER-FACE! LET’S TRY!”) Cole denies himself no curiosity, no pint of pleasure, no moment of mirth or madness, which are 100,000% synonymous.

Cole is crusty and greasy and shameless and sparkling.

Cole is all of us at our best. 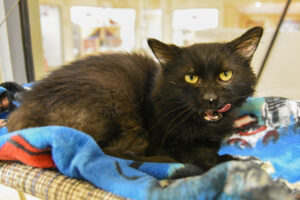 And Good King Cole has come into his kingdom, complete with rain and shine and ricotta and sadness. He’s here for the whole truckload, come what may.

And he’s coming for you and me, if we’ll let him.

So let’s get crusty, kittens. Life will drench us and perplex us and bread us in bits of grime and gold. We have the option to huddle, but far better to hurtle out into the parade. Some smiling days will Baby us and hand us sweet things out the window; some searing nights will force us to stick out our necks and our prayers and our hitchhiker thumbs. There will be friends and love and happiness and hunger and horror and Paul Giamatti films of uneven quality.

I don’t want to miss a thing. And if we get in trouble, a certain crusty king has packed his flares.

1 thought on “Out from under the awning”