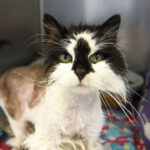 Editor’s note: This week, Miyoko made her gentle journey into the endless dawn, surrounded by people who adored her.

The following post, written before we knew time was so short, comes with gratitude to Miyoko, and to her extraordinary foster parents Bree and Todd, who jammed her brief stay with lifetimes of love. 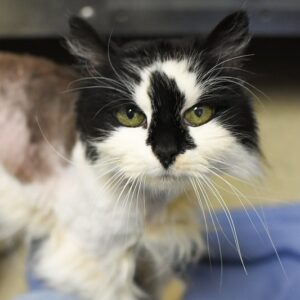 You’re never further than one dark night from a new morning.

In the meantime, it’s up to you whether you’ll curse the moonscape or dance along the edge of dawn.

If ever a cat could claim a right to curse the darkness, it would be Miyoko.

But while cats claim many rights (poultry; being treated with dignity and respect) and invent many others (power; being treated as dignitaries and rulers of worlds), not one, in all of history, has held onto the right to resentment.

Perhaps that’s because they know: resentment and radiance can’t occupy the same space, and only one sets you free.

Freedom was far from sight on Miyoko’s dark night of body and soul. We don’t know the thousand nights that led her to the roadside, but by the time Miyoko was spotted by Animal Control, she was shaken with seizures, shag carpet around a shanty of bones. Her starry eyes were the only sign of life, sparkling in fits and starts, as if from the very bottom of a canyon.

She looked like the last survivor of a meteor strike, all harrowed hair and singed secrets. But there was no survivor’s guilt here, much less self-pity: only a dignified lady still looking skyward, loveward, hopeward. 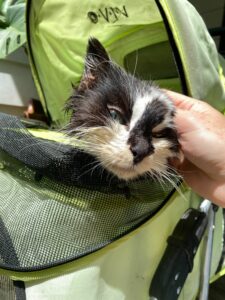 Cats are both graceful and honest, so I can’t imagine Miyoko drummed up any sort of denial about her situation. She was tired, and hurting, and shaking, and starving for both sun and sustenance. She’d seen the wildfires scorch every last wildflower in her garden, watched every tree tumble into ash, until her forest was an eerie moonscape. It was night; that was a fact.

But cats recall what smaller forest creatures (by which I mean you and me and Captain America and Queen Elizabeth) forget: nights end.

In the history of darkness, every single morning has prevailed.

And the sky may seem starless, but the astral plane is always boarding.

Miyoko didn’t know two stars about Tabby’s Place when she was taken by the wind. (She did know all the lyrics to Fleetwood Mac’s Rhiannon, though, which she hummed to herself.) She might be thrown like a shaggy lightning bolt into a one-star shack even sadder than the streets. She might catch a chariot to an endless sunbath where she’d grow as plump as the moon. 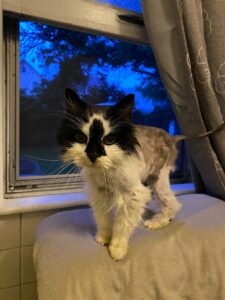 She didn’t board up the windows of her hope. She chose to stare straight into the closed eyes of the furthest stars — which are all shining suns, somewhere — and believe they were still there.

And, for better and worse, so were we.

On that bright, blinking morning, Miyoko was clobbered by comets of unconditional love. We adored her upon arrival. We delighted in each dainty bite she took — of life, of poultry, of the dawning realization that she was precious and protected and presented with the possibility of being someone’s cherished kitten, even many mornings since her youth.

But the first rays of dawn are only a down payment on the day.

Things were about to get improbably, incredibly, irrevocably better for the cat who “should” have foreclosed on hope. 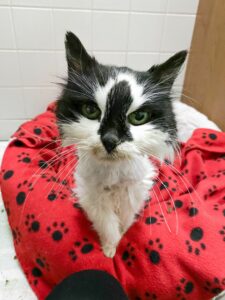 Miyoko wasn’t just going to be loved. She was going home, with none less than a staff member so selfless I shan’t repeat her radiant name here, only to say that it’s Bree and she is my personal hero, forever and ever amen.

Miyoko was skipping the earthy hearth of Tabby’s Place for a trip to the moon itself, the satellite of love where every hour reflects the sun.

She was making her way to the warmth that makes all the waiting worthwhile.

Mourning was melting into the morning. where every night is not a nightmare but an incubator, a birthing zone for the bliss that is every cat’s birthright.

Breakfast was served. But then, that feast had begun even before the darkness lifted.

There are those who make an earnest case for the probability that they do not, in fact, serve breakfast in hell. (Although if you’ve ever glimpsed a Taco Bell A.M. Crunchwrap, you would disagree. In the ominous words of the paper wrapper, “breakfast will never be the same.” Nor, presumably, will hell.)

But there’s a breakfast buffet that begins even when your heart is raw and your world is burning.

It’s ferocious hope; it’s reckless love; it’s the determination to see and be the dawn. 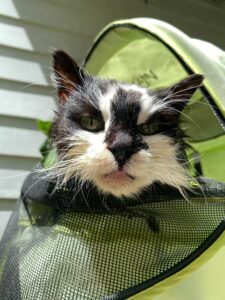 It’s the way of cats and children and saints and angels.

And we’re never more than one long night from making it our own, if only we’ll make the choice to stargaze through the dark.

Whether today feels like day or night, choose wisely, kittens.

Until we meet again, magnificent Miyoko, you are cherished beyond the furthest galaxies.