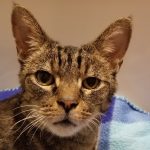 For some things, 2 months is a whole lifetime.

Fruit flies only live for 14 days, and many species of mayflies live just 24 hours. For them, 2 months would be an eternity, but for most of us, 2 months is a blink of an eye.

Norman came to Tabby’s Place in August of this year. He was found by animal control on the side of the road, unresponsive with a very low temperature. He was minutes from dying. Our wonderful vet team got to work and managed another Tabby’s Place miracle, Norman was going to be OK.

On the day he arrived, Norman weighed five pounds. He was emaciated and dehydrated, but we soon found out he loved to eat! He quickly gained weight and started doing much better.

Soon after he arrived, Norman was diagnosed with malignant melanoma. We had hoped to be able to do some sort of treatment for him, but when we found out it had metastasized to his chest, we knew there was nothing we could do. Norman was given a prognosis of 2 months to live. 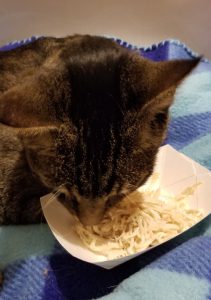 When I heard Norman’s diagnosis, I decided to take him home with me, as a “forever foster.” Norman settled in very quickly and loved having a home. The thing he loved the most, though, was the big human bed. If he wasn’t eating, drinking or using his litter pan, he was always on the bed.

The cat beds were not good enough; Norman liked luxury, and he liked to stretch out. He spent every night laid at the foot of my bed, and I learned to sleep with my legs tucked up so I wouldn’t disturb him. He also loved to be covered up, so he had his own soft blanket that we would cover him with. He always looked so content, all tucked in and cozy.

Norman didn’t like our two big dogs at first, but within a few days he was snuggling with them on the bed. That was typical of Norman; he loved everything and everyone with his whole heart. 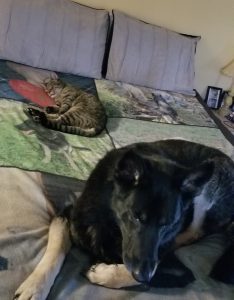 The one thing he loved more than the dogs was boiled chicken. He was so happy the first time we gave him chicken, and he licked his bowl clean. He would soon learn that he was about to get boiled chicken every day, along with wet food, dry food and treats. Norman gained three pounds in the 2 months he was with us.

About 2 weeks ago, Norman started having issues with passing stool. I took him to see his vet team at Tabby’s Place, and the news was not good. The tumors on his inguinal lymph nodes had grown so large, they were causing an obstruction, which is why it was getting difficult for Norman to pass stool. For the next week, we were able to get the stool to pass by giving him enemas, and he was put on a bunch of different medications to make his stool soft. Very quickly, though, that stopped working, and even soft stool could not pass the obstruction. Norman was getting uncomfortable, and there was nothing we could do to help him. It was time to say goodbye to this gentle soul.

I will never forget my time with Norman, even though it was brief. I was hoping for a lot more time: “I want him to have Christmas”, “I want him to see the New Year.” The time we had would never be enough, but I am so grateful we had those 2 months, and I got to share a small amount of time with such an awesome cat.

I am forever grateful that Norman was able to lay on a bed, eat chicken, have soft blankets, and, most importantly, to know what it is to be loved. When I find myself thinking I didn’t have enough time with Norman, I remind myself what could have been. Without Tabby’s Place, he would have died alone on the side of the road, never knowing what it is like to be truly loved, warm and safe. Even though his time with us was short, he knew love, and when he left this life, he did so surrounded by people who love him. That’s all any of us can hope for.

Norman, you will never be forgotten, my boy, and I love you forever. Until we meet again at the Rainbow Bridge… 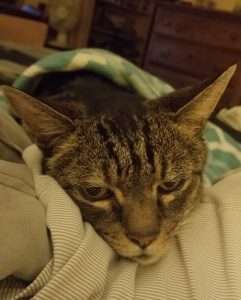