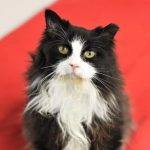 I used to wonder why we always offer a “moment of silence” in the wake of tragedy.

Why silence, when sound and fury seem like something more solid to offer?

Why silence, when the inner impulse is increased intensity? 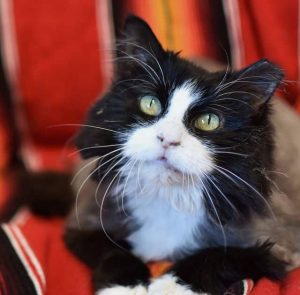 Ours is a world that prefers to whirl at a high speed and a high volume, a high percentage of the time. When grief unsheathes its sword and punctures the frenzy, it’s a very human instinct to just “frenzy” more ferociously.

Not so with cats.

Cats are under no illusions that their “doing” does much, much less does much to mow down the mysteries. Serene experts at “being,” cats don’t scramble to solve, tumble like weeds through their own words, or redouble their efforts when life doubles down on the hard and the harrowing.

They’re not always silent (exhibit A: ever-bellowing, holy-hollering Grecca). But they are, to a cat, exquisitely immune to verbal overreach.

When your grandfather dies or your dream flicks its nose at you or the sky itself shouts cruelties upon your head, count on a cat. 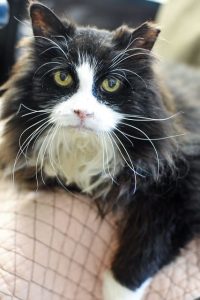 Count on a cat to be a soft, mossy meadow of fur where you can bury your burdens and your tearstained face.

Count on a cat to blink peace in your direction, slowing your breathing by sheer force of that ineffable ease they all have, even the baton-twirlers, even the chandelier-swingers, even Mr. Thief and J’Happy.

Count on a cat to count to ten thousand and back, if that’s how long it takes to simply will you back to something like wholeness.

They won’t leave you when you’re broken; they won’t spew platitudes that shatter the last few plates still hanging on your earthquaked heart-walls; they won’t chew the air or your frayed spirit; they will offer you moments and moonbeams of sheltering silence.

When it came to sacred silence, no cat excelled Sophia. The great and matchless she-mop of the Lobby was a queen of quiet even among a species skilled in softness. From the hour of her arrival, shaggy and sinus-suffering and long-suffering with our unquenchable urge to squeeze her, the most huggable of cats sheltered us in a Great Gentleness. 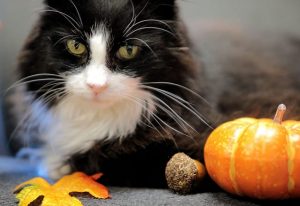 The years would bring trials and indignities: cancer that mocked and then burst through her beautiful nose; hundreds of hours spent being “nebulized” in a carrier as a fine mist ministered to her mysterious nasal passages; treatments and therapies and pokes and prods and the mere presence of minstrels and jesters and jockeys and jumblies like Olive and Anka and Walter and Bellamy.

Through it all, Sophia was a cloud of quiet.

We cared for her, sure. We envisioned ourselves — proud little saplings that we are, with invisible #1 Hero badges safety-pinned to our wrinkled T-shirts — to be her sheltering sequoias. We do this with every cat, and to some measure, it’s true. 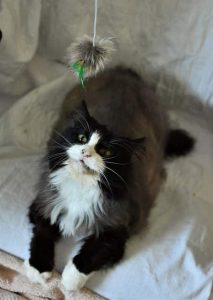 But to a far greater measure, far beyond the reach of words and tears, Sophia was our sanctuary.

When she wasn’t purring life back into a person (a non-invasive process conducted almost exclusively via lap-sleeping), Sophia was simply being, and her being was bright and beatific enough to bring warmth and light to our various whizzing, weary, word-flooded worlds.

In her silence, she sang.

In her quiet, she quilted us coats of many peaces.

She was never, ever, ever supposed to leave.

But cats are too wise and too good to spend too much time on this side of the veil, and so Sophia made it wordlessly clear that her last chapters were coming. We flailed, as we do, feeling our fingers flipping through too few pages. Soph was unafraid.

And as paragraphs passed by, Soph found the single human angel brave enough to be her everything, just when everything was ebbing. The final weeks of Sophia’s story were an epilogue of effervescent love; peace powerful enough to save the entire angry world, if the world would let it; and the sort of devotion that deserves far more than words. 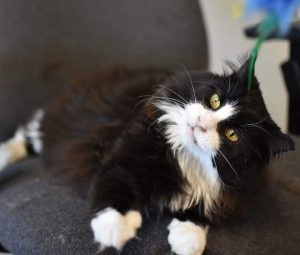 None of my words could do justice to Sophia’s foster mom, Drew (not to mention fellow cat Roy). Language fails in the face of such mercy. Drew stands forever in the pantheon of my heroes, human beings better and braver than this bumbling word-slinger can ever hope to be. If I can be but a small crystal in the window, casting sunshowers and rainbows as I catch their great light, I shall succeed.

And Drew’s great light drew Sophia into a full lifetime of tenderness, compressed into mere weeks. Jubilantly, Drew would send the staff photos of bliss-wrapped Sophia, with captions like, “The most beautiful girl in the entire world!” “I’m obsessed with her!” And, perhaps most poignantly, “This is the first time I’ve ever heard her purr!”

Sophia saved her song for the swan song.

And in the ache and echo of her absence, both the silence and the song go on.

Find a little nook of quiet for Sophia today. Slowing the frenzy, hog-tying the words, pausing the “doing,” doesn’t come easily to our kind. But to cats — especially incandescent cats of immeasurable magic, of whom we shall never know one greater — silence is love.

It’s surrender to the moment and the meaning.

Acceptance that we can neither do nor be nor mend it all.

The offering of our very selves.

I’m coming to understand: silence may be our greatest sacrifice, and love without sacrifice is love in name only.

A moment of silence for Sophia, please.

And a glorious gallery of Sophia’s season of sweetness with Drew: