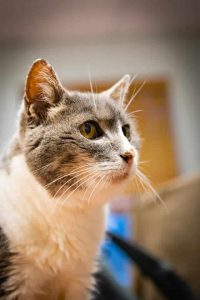 The Community Room is far too quiet today, too empty.

Despite her petite frame, Juliana had a personality that filled the room. She made her presence known. She was not to be overlooked. What she lacked in size, she more than made up for in voice. Juliana was actually adopted for several months, but returned for being too loud.

Every morning, Juliana greeted the staff with the first of a continuous stream of demanding yowels for room service. The two hour morning routine had begun. Jules perched herself squarely in front of the door waiting for breakfast to arrive. Each arrival was immediately informed of Juliana’s desire for food, more food, different food. The routine commenced again in anticipation of lunch and dinner. Juliana was rarely satiated and rarely satisfied. 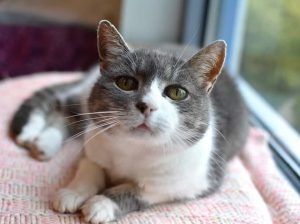 How does such a slight cat require so much food? In Juliana’s case it fueled her voice and her morning patrol. Once the breakfast feast was had, Jules began patrol of the Community Room. She would circle the conference table and chairs, grumbling as she went, lap after lap. If she encountered another cat, she would raise her voice in protest. As the conference chairs filled for morning meeting, she’d hop onto the table and begin a new set of laps, stopping to sniff and perhaps sample every coffee or water cup along her route. Sometimes she’d pause for a brief pet. Once the meeting was over, she could finally settle for a few hours.

Juliana took eating, patrolling, napping, and sun bathing very seriously. She had no time or patience for grooming. She was always matted, and I was always plucking those mats. Jules had much to say about these interactions. Yet somehow she always let me get away with it, and quickly forgave the intrusion. Perhaps she saw me as her adoring lady servant. To me, she was a kind and tolerant master who paid in purrs and nose kisses. 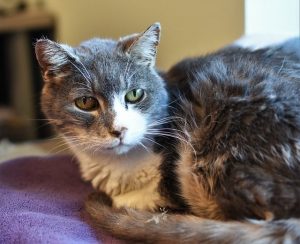 Medical testing was particularly bothersome for Jules. She could scream and squirm to the point of self injury to avoid a thorough medical exam or blood draw. She despised nail trims! In her last weeks with us, Juliana came down with a series of upper respiratory infections. She always responded well to antibiotics and would bounce back to daily patrol. But this time she didn’t bounce back, and our vet team was able to give her a thorough exam. An ultrasound confirmed our fear. Juliana had a pancreatic mass. Any attempts to surgically intervene would be far too much for a little lady cat, so we served her with love and kept her comfortable.

While her voice varied, Jules was always heard. Juliana yoweled. Juliana grumbled. Juliana could scream. She also purred. And then there was silence…

Jules, your voice and your pure spirit are deeply missed. 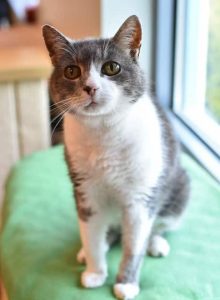