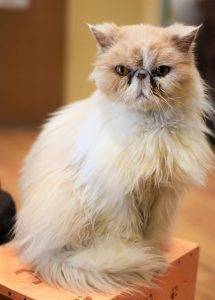 Let me start by “ripping off the bandage:” we lost dear Jonathan last week.

His kidney values had taken a severe turn for the worse.  We started aggressive fluid therapy, which can reverse rapidly failing renal function.  It can work wonders.  But, there is no way to know how effective it will be without trying.

After 2 days of IV fluids, Jonathan seemed a little better, though he was still not eating.  We opted to push fluids another day or two, just to be sure.  He was clearly very tired, but seemed to be resting peacefully in his cage.

We checked on him often … but, in the late afternoon, Dr. C. came to us with the news that Jonathan had passed on his own.

I went to see his body, lying peacefully under a nice warm blanket in the Surgery Room.  My mind flashed to how much fun it had been to have him as a resident.  Out of the almost 3,000 cats that we have seen, no cat has brought more joy or laughter to the building.

Just one look at that face and you couldn’t help but smile.  There was such an earnest-looking being staring out from that face (which looked like it was “kissed by a Mack truck”), and the surrounding mantle of water-soaked fur.

He managed to look regal and slovenly at the same time.  His beautiful fur was marred by poor self-grooming, and there were often bits of food or other detritus hanging from him. 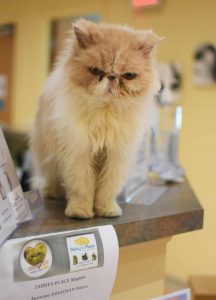 He was funny without trying.  He would trot around the Lobby looking like an animated ball of fur.  He was a cruise missile, programmed to seek the nearest lap or treats.  He is undoubtedly the record holder in lap time, and he could move like lightning when he heard the crinkle of a treat bag.  Just a crumple of paper in my office and he would appear, as if by magic, at the gate (keeping my FIV+ office mates in).

As sad as I am, it is hard to think of him without smiling or, even, laughing.  And, as gentle as he was, I saw witness to an encounter with Anka, our most butt-kicking-capable cat.  On that day, as Jonathan walked by Anka’s gated area, Anka smashed against the barrier, startling Jonathan.  Did our Persian hero respond by running, as any sane cat would? 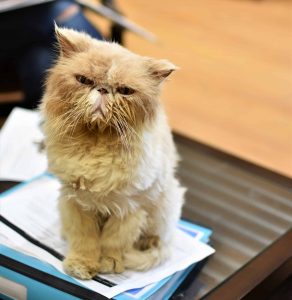 No. Jonathan turned to face his enemy and did his best imitation of an angry cat, puffing to the maximum.  I didn’t have the heart to tell him that he looked comical and not threatening.  After a few seconds, he trotted off, knowing that he showed Anka who “was boss.”

What an amazing chain of events that led to sharing paths with him for a while. Good work, Universe.  It was worth the pain.

— Jonathan (the other Jonathan)