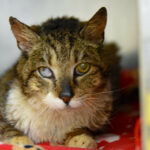 If you always expect the worst, you will be pleasantly surprised.

If you always expect the best, you will be pleasant, period.

And if you always expect that tomorrow just might be your birthday, you will approach the pleasure known only to cats. 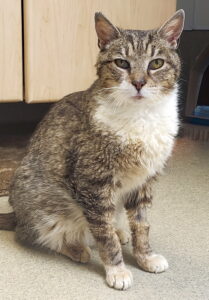 We’re prudent little creatures, aren’t we? At least, that’s what we tell ourselves, as we tug our castles out of the air and shove stacks of sandbags around our shanties, grumbling about hurricanes and hardships and unwelcome reports from doctors and unwelcome albums from Kid Rock.

If we expect all the Pizza Huts to close, we won’t be disappointed when they do.

If we don’t expect to win $500 on a scratch-off ticket, or find the perfect sun hat, or hear that our favorite cat’s questionable lump is just a fatty cyst, we won’t be let down by the letdown.

If we keep our heads down and our voices low and our prayers reasonable, we won’t be blindsided by bad news.

We’ll just be blind to hope, all the time.

Far better to bank our yearnings with the species stubbornly set on optimism, the sunbeams who count on the persistence of Pizza Huts and mercy (which are largely overlapping categories), creatures who expect “the best” even in the stark, years-long absence of evidence for even “the okay.” 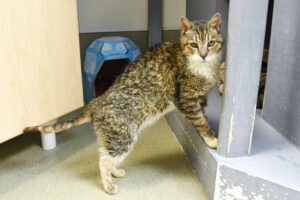 A wiry yarn-ball of a cat, Willem — full name Willem daFriend Rosenberg — had his hopes unraveled hundreds of times before we met him.

He was not cast in any of the Spiderman movies, in any role. He was not invited to live and reign inside a Pizza Hut, or any lesser hut. He was bitten by mean cats. He was not offered bites of calzone. He had FIV. He did not have a friend.

Both Willem and his Book Of Cherished Memories were very thin indeed.

But Willem had one enormous advantage: a life-rope of hope long enough to tow the whole weepy world home, and strong enough to withstand the yanks and tugs of life’s bony fingers.

And so, when he was finally cast in the comedy called Tabby’s Place, Willem greeted us like an old (da)Friend.

His kindly, cloudy eyes crinkled into smiles; his ribby chest rose with valor; his message was simple: “I’ve been expecting you!” 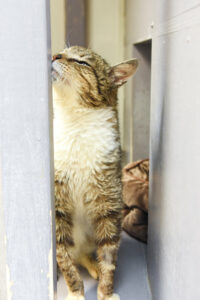 Expecting Temptations — none of which would be the last Temptation, since treats, like hopes, are in the business of multiplying, as long as you feed them.

And Willem was willy-nilly, wonder-working, wild-abandoned when it came to feeding hopes.

Now that he was getting hugs and troughs of vaguely-beefular products on a regular basis, he could dare to dream of prosciutto.

Now that he was feeling better, feeling his worth, feeling like a million bucks if bucks were bison burgers, he could presume to pray for…well, prosciutto. (His hopes were vast, but simple.)

And now that he’d confirmed that, in fact, every day would be like his birthday, he could bring the cake to all the cowards and curmudgeons in his midst. That, I’m afraid, would be us. 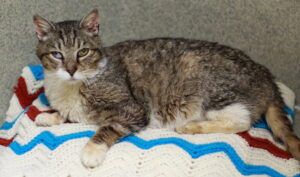 Unlike Willem, we are petrified of hope. We’d sooner take our chances with disappointment than the chaos of dreams. Resign yourself to the grey crayon, and you won’t feel lost when a bigger kid steals the cerulean or the salmon or — your secret favorite — the periwinkle. Assume eternal singleness, and you’ll be spared the scarlet cheeks of “it’s not you, it’s me.”

Or to win the top prize. 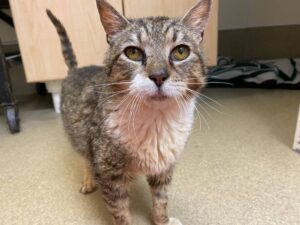 Or to win a gasp of joy from the one small viewer who needed precisely your art on precisely that day.

We hope small, and so we hobble along in shadows. All the while, we could be making art and making pizza and making the most of the musky, mysterious days we’re given.

Some prayers will be answered; some dreams will be deferred; some waits will be longer than a CVS receipt, or an unraveled ball of yarn, or the sunbeam that tracks from your toes to the yellow ball in the sky. 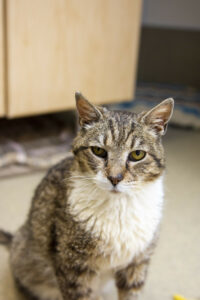 Some days will shatter our glass and break our hearts, like the cold day in July when Willem jumped the fence to heaven.

Good heavens, do we miss him.

But if we’re wise and willing and Willemy, we can still feel him here with us.

We can enjoy the very act of hoping.

We can hop along even if our hips ache.

We can make much of mini-muffins even if there’s no sight of a birthday beef cake.

We can remember that the past is not a padlock — it’s prologue. And if the writer gets a little long-winded, we’ll get to the good stuff eventually.

There is always good stuff.

Meantime, the “maybe” stuff is the stuff of life. Maybe tomorrow will bring the love of your life, bearing gardenias under a cerulean sky, and also an acceptance to Harvard and a Pulitzer and a Supreme Court appointment. Maybe tomorrow you’ll put your sweat shorts on backwards and the barista will misspell your name and your boss will tell you your services are no longer needed and your wife will hit the road with Spiderman. 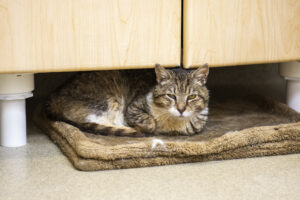 More likely, tomorrow you’ll wake up to a world that includes hash browns and half-measures, clouds shaped like bears and crumpled papers, little compromises and micro-mercies, mended fences and endings that aren’t final.

In other words: expect the best, and you’ll find “best” and “bad” and “buffoonery” hopelessly crocheted together. But your eager expectation itself will be guaranteed cake.

And “Guaranteed Cake” happens to be Willem’s ABBA tribute band. 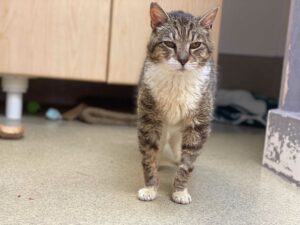 We still hear him singing today, even now that a band of angels has borne him to the land where hope never hides its face.

And if we fall on our faces and fall out of favor and fall short of frolicking through fields of free-range pizza, there’s always tomorrow. Things will fall together again, no matter how often they fall apart.

Until we meet again, thank you for being da best of friends in a hope-hungry age, Willem.

*Let the record clearly state that not only will I not mock your Midnight Train to Georgia, I will personally be one of your backup singers, and I will raise up an army of purring Pips from Tabby’s Place. You name the time and place, Gladys.