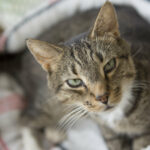 If there’s a chill in the air today, don’t blame December.

We shiver because a great fire has gone out.

A great fire…in the form of one smallish, impish brown tabby. 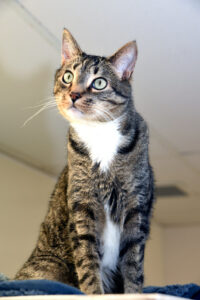 There has never been a single occasion on which I’ve typed the words “Forever Loved” and felt adequate to the task ahead. Whether a cat has been ours for ten days or ten years, I feel the weight of their soul sitting on my chest and purring, and I know I don’t have the strength to lift them into the light in a way that will fully capture their splendor.

That has never been more the case than today.

“Splendor” was admittedly not the first word one might associate with Adam. Rambunctious and rebellious, a rowdy rodeo in one petite package, his reputation preceded him. We were warned: he was incontinent, and also an entire continent in his own mind. He’d been a bottle baby — even worse/better, a solo bottle baby — and everyone knew what that meant.

We knew what we were getting into with Adam. 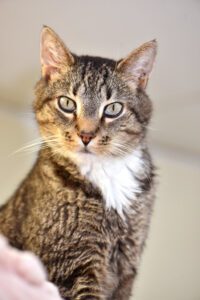 And there was absolutely no way anyone could have expected what we were getting into with Adam.

He was, indeed, incontinent: shamelessly and even gloriously incontinent. It somehow suited his explosive nature to be uncontrollable in the gastrointestinal department, and I swear he found it all hilarious.

More precisely, he found it all hilarious — all of it, the life and the laughter, the humans and the cats, the fact that the sun rises every morning and the fact that Adam could rise up to someone’s shoulders in twelve seconds flat. (You have never felt fully alive until you have been Adam-spidered, his spastic elastic legs skittering up your person, threatening you with diarrhea dollops and deep delight all at once. The latter made the former worth the risk.)

Even as medical mysteries dogged him, the cat who out-happied every puppy lived his life in a perpetual state of laughter. Slower than Adam in every sense, we humans studiously noted all his strangeness to the vet team, the changes in his gallop and his hunchy-bunchy walk, the days when he seemed “off” and the days when he tried too hard to get all the other cats to be neon-“ON.” But Adam, body and soul, was always forty-eight steps ahead of the rest of us. 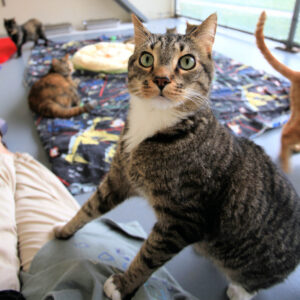 If he weren’t such an earthy elf, we might have thought Adam was composed of pure flame. He had the ability to light your day — even dismal days, December days, doubt-drenched days — with relentless life. His happiness was frantic and overwhelming and also completely, brilliantly, sane.

The truth was, there was always a fire burning. Even when his beleaguered belly was in pain, and Boom wouldn’t play his reindeer games, and humans insisted on expressing his bladder and stopping him from fully expressing himself, life was firelight. Even when the solarium was cold and the finest fish mush lost its allure, bliss was ablaze.

Even when pain was stalking his skinny body, Adam was running his race with joy. 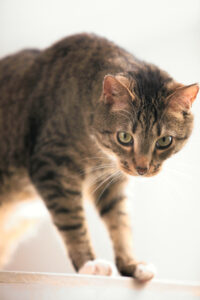 Even as he was running out of days, Adam was exquisitely aware of being alive.

Even today, this day we never really thought would come, Adam is reminding us to be alive.

Of course we know that cats are mortal, and fires get extinguished, and grief is love’s unbidden bodyguard. But after over a decade of Adam, you begin to believe that some flames are forever.

Adam’s health was never really “good,” but he never worried, which gave us the luxury of letting our worries stay votive-sized rather than wildfire-wide. If Adam were a Christmas carol — and he certainly was — he would be “Have Yourself a Merry Little Christmas,” specifically the lyric, “let your hearts be light.” 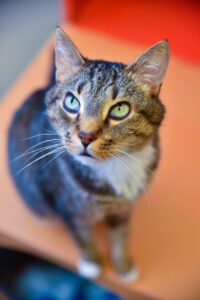 Adam was never known for “responsibility.” Which is why he made it his responsibility to tell us all, in a thousand breathless ways, to let our hearts be light.

That feels impossible today, the day that began with Carolyn finding Adam gone. We’d long suspected a brain tumor, but we never really expected Adam would die. We did, and we didn’t. You know all too well what I mean.

And Adam, the sun at the center of the Tabby’s Place universe, would let us grieve. He would let us feel the full force of our feelings. He knew — I write this with complete confidence — that we felt the full fury of all the stars and comets and suns and mysteries for him. He knew, and he loved being so loved, and his flames rose ever higher.

And so, before and after and smack dab in the middle of today’s tears, he would want us to rise.

He would want us to climb up to life’s shoulders in twelve seconds flat. 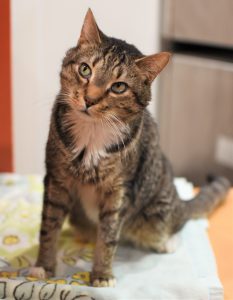 He would want us to remember the truth at the center of the universe: the fire is still burning.

The love we shared is light enough to carry us onward.

And if we really loved the fireball of Suite A, we will carry his torch. Better yet, we’ll become torches. We’ll be reckless with our affection; unjaded in our joy; explosively, shamelessly, even gloriously in love with life.

We’ll let our hearts be light.

Adam, until the day we meet again in marvelous light, may we bear your fire in our bellies. We can never thank you enough for the love, the friendship, and the flame of hope you kindled at the center of our universes.

Your splendor will blaze at Tabby’s Place and beyond, forever. We adore you.

Note: I would be remiss if I didn’t add that Adam enjoyed an extraordinary interlude in a home that will always be his. One of our most selfless staff members took Adam into her home, lavishing him with joys he’d never known: a “person bed,” a person of his own, a personal reminder that even he, even Adam, was adoptable. Ultimately, Adam ached for Tabby’s Place so much that our staff member had to break her own heart to heal his, bringing him back to spend his final months in his beloved Suite A. Love makes mysterious demands of us all, and Adam’s adopter-angel loved him enough to let him blaze where he belonged. Today our hearts are intensely and especially with her, as Adam will always be uniquely hers.