Donate
We’re all a bunch of animals 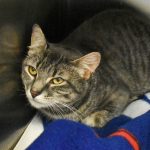 We like to think lofty thoughts at Tabby’s Place.

We like to think of ourselves as lofty beings, just a half-step below the angels.

All our loftiness gets all of our cats laughing. Uproariously.

I’m not too proud to admit that we’re all a little too prone to pride around here (“here” being “this here blue skyball between Venus and Mars”). Even the humblest humans, the aw-shucksiest specimens, the ones who shrug off all praise, perceive themselves as something at least somewhat special. 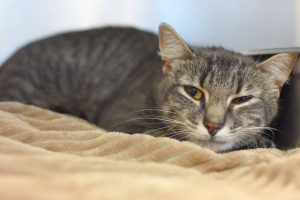 We have mighty minds that can make their way to the moon.

We come to the table with inspiration and innovation that feel immortal and infinite.

We come up against chaos and sorrow and burnt breakfast, and we overcome, over and over again.

We come to believe we’ve finally reached the speed of light where nothing will ever squash us again.

And then our bodies tie our brains’ shoelaces together under the table, and we get up and fall down and cry.

This is not a problem for cats, and not only because they are shoeless vagabonds who would prefer Velcro if given the choice anyway. 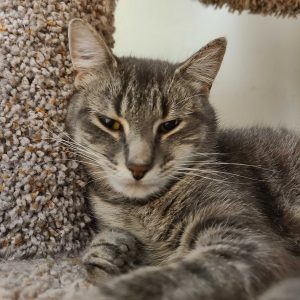 Cats understand, accept, and elegantly or inelegantly live with the fact that their control centers are not fully in control.

The body has a say, and sometimes it becomes a shout.

The color of mystery and the size of a granola bar, Nessy was just going about her kittenly business. This may not be evident from her photograph, but be informed that Nessy has an IQ of approximately 175, and reads speculative treatises on neutrinos and papal encyclicals in her spare time. (Also Real Simple magazine.)

Nessy’s narrow eyes and slim pinstripes hide an intellect so deep, you’d best trade your water wings for a submarine. Her cerebral gifts could solve all of our problems. Smart and quick and gently deposited by the angels into a world that needs her, Nessy would seem to be a cat in full control.

Nessy has a body. 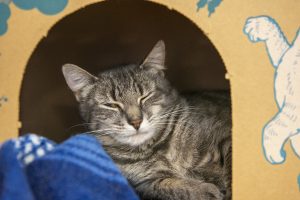 More accurately, Nessy — like you and me and Bucca and Pepperoni and Dwayne The Rock Johnson and all the salamanders you could fit in a submarine — is a body, as well as a brain, and a soul and a spirit and all manner of silver mysteries that even I am too smart to try to name.

Nessy is made of stuff, simultaneously soaring and squishy…and sometimes, stuff does not cooperate.

Shortly before we met her, Nessy’s stuff met some whiskery lothario’s stuff, and the rest is reproductive history. Despite being the size of a granola bar, Nessy was bound for motherhood.

Having never been a snack-sized feline carrying two walnut-sized felines, I can’t venture to fathom what Nessy felt. But it doesn’t take a colossal cerebrum to see that Nessy’s body flung full-sized feelings over her head and kidnapped her entire being. 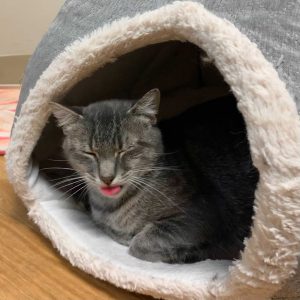 She was nurturing. (Nessy the Great: brilliant scholar, selfless mother, and reportedly a mezzo soprano of great renown, although I have yet to witness the last.)

She was, by all accounts, a newborn all over again, overcome by hormones and changes and the long lambada between body and brain and spirit and soul.

She could not think her way out of this one.

She needed physical fixing and fawning, if she would ever feel/think/be OK again.

When we’re honest, we all know we’ve been in Nessy’s place. Just when we think we’ve crawled out of the sea-stew of disruptive feelings, finally surefooted on the even keel of tidy tides, it happens.

Pain. Oh, slippery pain, you find us all.

We’ve all had the kind of pain that kicks you down Maslow’s hierarchy and reminds you you’re just a tiny bunny. Suddenly, no amount of affirmations or grit or knuckleheaded white-knuckling will restore you to the captain’s seat. It’s humbling. It’s terrifying. It makes children out of us all. It reminds us that we never ceased to be children in the first place.

And it just might lead our less-powerful-than-preferred brains to fresh peace, if we’ll let it.

There’s a funny story in the Bible about a fella named Elijah. Like the cat who shares his name, this was not any ordinary fella. He was what they call a Mighty Man Of Valor, a prophet of shimmering power, an all-around exceptional dude whose dudeliness and derring-do were never in doubt. 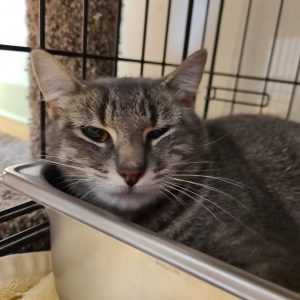 But one day, the Mighty Man Of Valor decided he wanted out.

He asked God for a favor: “How about we just end the book here? Credits, please. I’m done. I’m toast. El Toastarino.”

In other words, Elijah was fixin’ to die.

One might expect, at this point, that God would roar back, remind Elijah that he was, in fact, a Mighty Man Of Valor, promise divine assistance, or send a flock of angels, or just say “snap out of it, bud.”

OK, the Hebrew doesn’t literally say “toast,” but I’m sticking to this translation. An angel (just one) arrived with some sort of snack, a jug of water, and the command…to take a nap.

I’m not making this up.

It actually happened twice in a row. 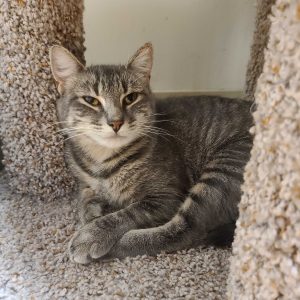 After nibbling his second round of toast (do you think the jam was grape or strawberry?), sipping his drink, and dozing a bit, Elijah woke up and proceeded to get down to business.

Nessy’s catly components all found nourishment at Tabby’s Place, starting in the phenomenal foster home of a staff member who shall remain anonymous except to say her name is Jess and she is my personal hero. Nessy has continued to be fed, and rested, and wrapped in body-and-other-bits bliss by all hands on deck.

These days, Nessy and her various parts are keeping company with a strange peanut gallery of peculiars. That is to say, Ness is my newest office mate, gently sliding into the captain’s chair once occupied by Heather.

We’ve all got all manner of feelings and thoughts. 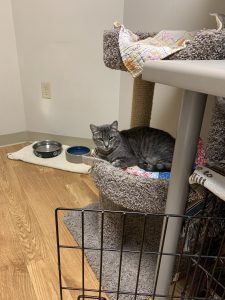 But snacks will help.

So will naps. (I can neither confirm nor deny my participation in such naps.)

And so will the gentle reminder from our bodies that we’re all a bunch of animals: vulnerable, fragile, bodily, beloved.

We’re made of stuff, just like the cats we cherish, and acknowledging that fact might make us a little kinder to each other. Maybe even ourselves.

Provision comes from unlikely sources for these earthsuits of ours. Nessy found shelter when her hormones howled loudest. You and I will find hugs and granola bars when we’re depleted. And, nourished on the natural and supernatural levels alike, we’ll find the strength and zest to go on.

Now go have a snack.

1 thought on “We’re all a bunch of animals”