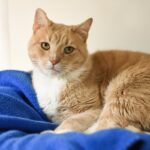 We can take “self-deprecating” — humor or otherwise — too far. 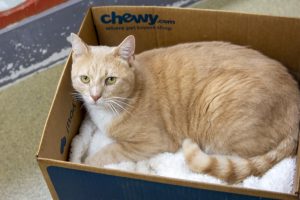 This all occurred to me courtesy of the timeless koan known as “Accidentally in Love.” You read that right: the 20-year-old jewel of the Shrek 2 soundtrack spoke spiritual wisdom to my inmost soul. Specifically, this line: “settle down inside my love.”

(Also this one: “well baby I surrender to the strawberry ice cream never ever end of all this love.” Truer words were never spoken, non?)

This blessed berry of a bop came to me as I was driving around town, thinking about Gator and failure and self-flagellation.

Gator, as longtime readers will recall, is the toothsome resident with the distinction of being the first Tabby’s Place cat to personally deliver himself to Tabby’s Place. Unlike the multitudes who come via Good Samaritans and public shelters and Animal Control and international rescuers of mystery, Gator unceremoniously arrived at our side doorstep, deposited himself in a cat trap, and said, “I hath arrived. Let the wild strawberry festival commence.” 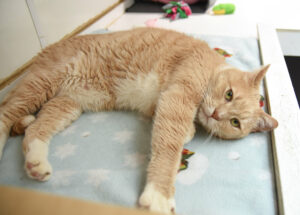 (These were his precise words. I just write down what I’m told, kittens.)

Since that time, Gator has been greater than the sum of his parts, which is saying many great gallons and galleons of “a lot.” Gator’s parts include marching bands of teeth, fur the shade of toasted almonds, and a soul approximately the size of the universe (both of which are ever-expanding and filled with hot, mysterious things with names like Nuclear Pasta).

Gator has bitten persons and cats and the overripe edges of life.

Gator has greedily glee-d himself giddy on the whirls and swirls and splendors, alternately pretending his friends are chicken tenders and turning all tender-hearted in the presence of love.

Gator has been a goofus and a doofus, prone to chase his own tail and tell tall tales. (“The nice volunteer who cleans my poo box was the inspiration for Shrek.” “I met Martin Sheen at 2am in Ringoes the night I walked into that trap.” “Strawberries taste best if you cover them in Reddi-Wip and then throw away the strawberries.”)

Gator has gotten himself into trouble, and into loving arms, and into strangleholds by stronger cats, and into the enviable position of being On Hold. 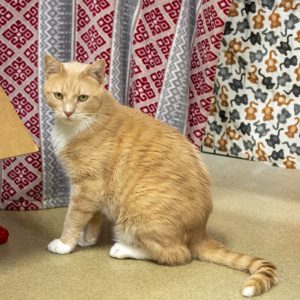 When we are not speaking of calls to Customer Service, On Hold is precisely where we all yearn to be.

When you are On Hold, you are on your way (forever) home.

When you are On Hold, you have been beheld and beloved and plucked from the berry bush by someone whispering, “I want you. Yes, you, just as you are, exactly as you are, because you are what you are.”

When you are On Hold, you can release your grip on all the micro-meanness that spits through your inner soundtrack.

You know the songs of which I speak, the self-deprecation station that never fades to peaceful static. (And if it did, we would probably call Customer Service.) 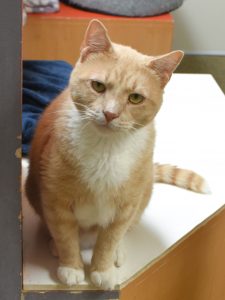 Oh, we can dress it up in humor, the barbed kind that spears every sweet berry and makes it bleed. We call ourselves dunderheads. We respond to our mistakes with emails like “me stoopid.” We blame our bumblings on our lentil-sized brains. We tell ourselves and the (generally far kinder) witnesses to our weirdness that we are foolish children, jam-faced and jumbled.

It’s good to laugh at yourself, as long as you’re also laughing with yourself. But at some imperceptible moment, it can all turn a little too mean. Every error becomes evidence that you are, in fact, the personal embodiment of the Great Dismal Swamp. And that’s where you’re in dread danger of being placed back on the floor.

Because the problem with putting all your berries in the On Hold basket is that, sometimes, the center does not hold. Any human being or senator or walrus (although certainly not a cat) can let us down. They can look at us in a different light and say, “on second hand, nah.” They can deposit us back in the trap of gripping our secret guns and turning them on our own hearts.

Unless we were never listening to the wrong On Hold music to begin with. 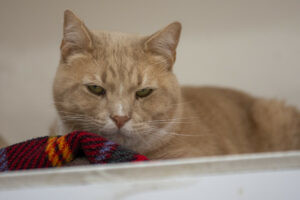 Gator was certainly not, which is why none of his gnarled chapters have caused him to condemn himself.

First and freakiest self-delivery to Tabby’s Place? “I am not a weirdo; I am a wonder, a pioneer! No one before me has had the courage!”

Peppery personality, prone to shifting from toasted-almond to burnt-to-a-crisp? “I am not inconsistent; I am Honesty incarnate! I feel what I feel and I invite you on my color wheel!”

Put on hold to be adopted, then unceremoniously un-chosen? “I am not unworthy; I am not unadoptable; I have not been passed over; my entire life is taking place right on time. This was simply not my ship. And when my ship comes in, it shall be an 80-foot yacht covered in streamers and chicken tenders and sycophants spraying me with Reddi-Wip.”

This is where Gator is greater than we are, shoulder to sun-kissed shoulder with the saints and angels. This is why Gator could handle being unhinged and abnormal and ultimately Un-Held. 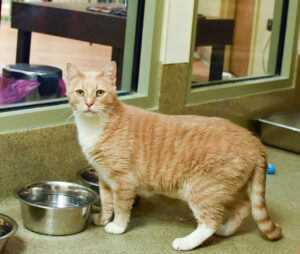 This is the greater Gator secret of being settled down inside Love.

Love: the kind that’s not dependent upon particular particulars, much less your own perfection.

Love: the kind that’s always available, always ripe, always safely stationed in your port and in your corner.

Love: the kind that kindles kinder voices and stomps self-deprecation like a vat of smushy strawberries.

Love: the kind that insists you settle it in your heart that you, salty and sandy and sprinkled with a thousand contradictions, are precisely enough, so enough with the meanness.

Love: the kind that reminds you that, even if you are the Great Dismal Swamp, this is a hugely important place, precious even, wild and overgrown and vital to birds and butterflies and blinkered beasts like Gator and you and me. 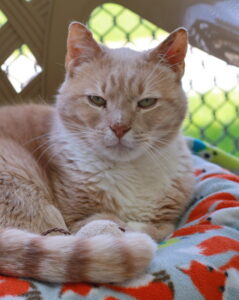 Love: the kind that wants to tune your station to play a little less “I am a steaming vat of rhinoceros excrement” and a little more Counting Crows and counting blessings and counting Gator’s Greatest Hits.

So maybe you’ve gotten yourself into traps and flaps and fripperies too foolish to name. That doesn’t make you an idiot; it makes you an ice cream cone of many scoops and sprinkles, messy and marvelous and fully alive.

So maybe you exclaim “Jiminy Crickets!” every time something exciting happens. That doesn’t make you dorky; it makes you fantastic. 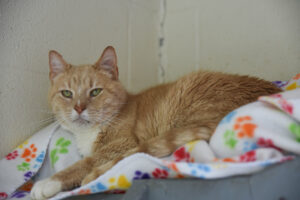 So maybe you showed up to Some Event overdressed or underdressed or flamboyantly dressed. That doesn’t make you embarrassing; it makes you a living creature who dared to get out of bed, costume yourself as best you knew how, and bear your beauty into a fearful world. (It also means you did not show up entirely undressed, so things could have been considerably worse/weirder.)

So maybe you’ve been weighed and measured and found wanting by someone. That doesn’t make you inadequate; it puts you in position for the someones who will sing your songs, whose love will be anything but accidental.

Maybe we can hold our berries, our blessings, and our benedictions a little tighter, and save the self-deprecation for another day.

No, better yet, let’s smash it like a strawberry, and then go spray Reddi-Wip in each other’s mouths.

Anxious postscript: Since the writing of this post, Gator has developed a nasty case of pyelonephritis, a particularly mean-spirited urinary tract infection. As I type these words, he’s eating his dessert via feeding tube. We’re optimistic, but Gator would greatly appreciate your prayers. Also your FedEx emergency packages of Reddi-Wip, which he insists can be administered through a tube. Thanks, kittens.