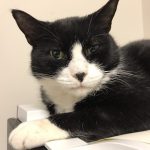 New Year has not yet arrived.

Ronnie knows how to rock the in-between.

This — January 9th, a moment between New Years — is not the first time Ronnie has lived in-between. We first encountered the sad-eyed tuxedo through our TNR work, snipping and tipping him before returning him to his colony. For several happy years, he lived in that liminal zone between being a Tabby’s Place cat and being a feral cat. He was both: meticulously cared-for, but outdoors; adored, but untouchable.

I’ve heard it said that small minds struggle with the idea of “both/and.” We — small-minded creatures all — are far more comfortable with tidy either/or’s, keeping our categories and our cages and our big bold borders well-drawn. 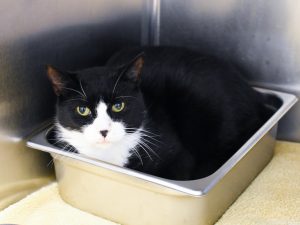 Cats, though, excel in the both/and. Friendly and feisty. Heavenly and hellacious. Trusting and timid. And so, they’re far more comfortable than we are with living in-between for extended periods of time.

Ronnie’s shadow season ended when his colony caretakers found him limping. Being a Tabby’s Place cat despite his colony accommodations, Ronnie rolled on home, where we swiftly diagnosed him with an abscess, kidney issues and a fine melange of friendliness and fear.

Should you pet Ronnie, he would immediately enlarge his eyes to the size of spaceships, shooting rays of terror enough to make you tear up. However, he would simultaneously raise his tuckus higher and higher and higher into the sky, that unmistakable “I AM A HAPPY CAT AND ME LIKEY THIS” move.

Once we got Ronnie’s roiling medical issues under some semblance of control, we had a new conundrum: he needed somewhere to go. Our large Suites are filled to the brim with knuckleheads too brazen to properly welcome a gentle philosopher (picture Kierkegaard in the cheap seats at an Eagles game). The Lobby and Community Room meant Too Many Terrifying People. 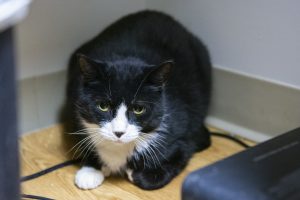 And so Ronnie was relegated to what just may be the most mixed-up, moony, weird but well-meaning place at Tabby’s Place: my office.

Ronnie came to me (and Bucca, and Denni) just before Christmas, but it was New Year’s that set him free from his introduction crate. Our introduction has been both halting and hopeful.

Ronnie’s earliest days with us were spent smashed into an area behind my computer tower approximately the size of a Rice Krispie treat. I attempted to squeeze in beside him, but, being considerably larger than a Rice Krispie treat myself, had to settle for flattening myself to the floor and blinking into his soul.

He let me pet him; his eyes and spirit did not appear to appreciate it, although his tuckus took flight. 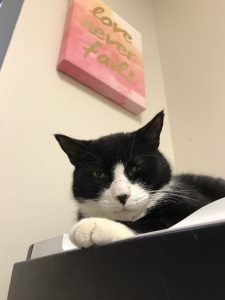 I cooed; I sang; I listened to his thoughts on the state of the world. We exchanged our grave concerns about geopolitics. We agreed that it’s a very good sign that, at just this moment in history, Baby Yoda has captured the collective heart of humanity. We prayed about the Australian bush fires. I acquired a spectacular amount of floor dust on my belly.

It was good. It was a new season, just in time for a New Year.

And then, a minor miracle: Ronnie left behind his cobwebby corner for a new vista, where you see him in these photos. I present to you, Ronnie Rosenberg, Prime Minister of the Printer, thriving on his throne (or at least wringing out its warmth).

This big, brave move provided irresistible irony: please note the sign above Ronnie’s perch, shouting the truest truth ever to take care of us all. Ronnie, alas, does not yet fully believe this. (This is despite my repeated promises to bring him chicky nug nugs. Ronnie’s terminology, not mine.) Neither does he disbelieve it. (This despite the fact that, unlike love, I do fail, often and spectacularly, and then there’s Denni, who hisses in his face every chance she gets, but that’s another story.) 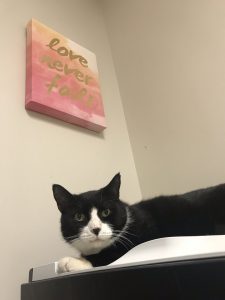 We are between paradigms and ponderings and New Years. Which brings me back to where we began.

And so here we are, Ronnie and you and me and all of us earthbound beasties, in between new and new. We can and will fail, achingly and often, but love won’t.

Wild unabandon, part I
Epilogues: October 2021
The minutia is the mission: Forever Loved, Heather
It’s all about Ronnie
We make the rules