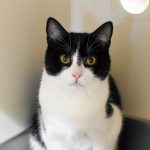 The kindest thing is often the hardest.

Loving someone enough to set them free is often the kindest thing.

When Perseus returned to Tabby’s Place, we knew that the kindest, hardest thing would happen sooner rather than later. We knew, when he came back, that his kidneys were unfit to serve the needs of the tiny titan. We discovered, too, that his heart was insufficient to its task.

We also knew that Perseus’s heart was the gentlest, most endearing, throb-worthy heart that ever beat a drum slowly, or quickly, or in any sort of way at all. To know Perseus was to fall madly and deeply for a pint-sized furball with a colossally small, yet mighty meow. It was impossible not to stumble over one’s self trying to meet his every demand.

Except, you can’t always get what you want, right?

Not unless you’re Perseus.

Perseus excelled in turning every staff member and each volunteer into his personal door openers. He also made it clear that, absent someone with opposable thumbs, he would get what he wanted anyway. Somehow, either by magic or by teleportation, without any assistance, Perseus would appear on the other side of the gate of the Executive Suite from where he had been. Nobody knows how.

Perseus was never one to divulge his secrets, not even to fellow executive cat Honey. So, one moment he would be within the suite, the next he was in the lobby. The relocation was silent every single time. There were never any witnesses. There was just Perseus, as pretty as you please, on the other side of the gate. An easy feat for a demigod in cat’s clothing. An enigma for the rest of us.

To make matters more challenging for his human caretakers, Perseus also developed a great interest in the water fountain inside Anka’s enclosure. Perseus wanted nothing more than to drink from THAT particular water fountain — despite there being nearby water fountains that could be easily accessed without risk of bodily injury. Rather, Perseus sought the more challenging, not to mention dangerous, undertaking, as befit a demitasse of his stature. The little cat with a great big personality simply slipped between the bars of Anka’s fence to get what he wanted.

But, now, Perseus has been recalled to Mt. Olympus. Heraldic trumpets have blared their fanfare to announce his march across the rainbow bridge to walk alongside taller titans.

Perseus, the little cat with a meteoric impact, has joined Andromeda and Cassiopeia to take his proper place among the stars.

We will forever love Perseus.

We will forever remember the light Perseus shone here on Earth, especially when we glimpse his likeness in the night sky.

We will forever remember the joy of little Perseus with each meteorite he casts off.

We will forever remember the littlest titan who gave us more than we ever knew we wanted.