It’s been a worrying time for our lovable boy, but we’re hopeful that he’s finally turning a corner on the road back to good health.

Thomas still has his esophageal feeding tube, and he will for several weeks more, but he’s in no pain and seems to be doing well. The tube site is cleaned and re-bandaged on a daily basis, as the last thing we want is another abscess sneaking up on poor Thomas! 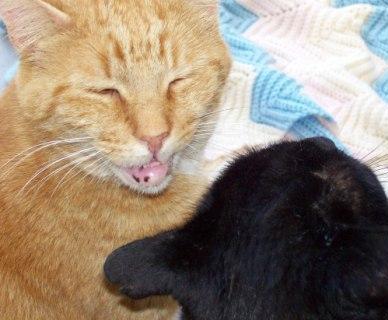 The other unfortunate side of Thomas’ feeding tube is that we can’t allow him to roam around his suite, as we usually do. There are far too many ways in which he could injure himself or knock out his tube, and he really doesn’t need any more medical complications right now.

This is one of those rare instances where we have to keep a cat caged. We know that our big guy would much rather be sunning himself in his solarium with friends like Jasper (who he’s grooming in the photo at right), but fortunately he’s been quite cooperative about being caged so far. It’s as though he understands we’re not doing it by choice. We’ll have to keep him confined until we’re certain he’s healed sufficiently, but it should only be for a few weeks longer, so he’ll still get to enjoy some good autumn weather in his beloved solarium.

As always, we all appreciate your help in allowing us to take such good care of His Orangeness.