There’s good medical news about our favorite orange tabby—that is to say, none at all. Thomas has been doing very well over the past month.

Cooler weather notwithstanding, our boy still prefers to spend his time in the solarium. Both Thomas and suite-mate Jimmy are crated indoors for their food, but, when released from their crates, both make a beeline for the door or the ramp, crying to be let back outside.

His Orangeness has developed theatrical tendencies, and he is becoming a ham. In late September, I was at Tabby’s Place on a Saturday. A young couple showed up. The woman had been a sponsor of our Special Needs cats for a couple of years, and I gave them a tour of the place. When I described the solariums, she was most interested and asked if she’d be able to see them. We all went around to the back of the facility. Now, when you do that, the FIV+ solarium is actually the third one you come to. We had paused at the second solarium, where the woman was admiring Mango and Star. I happened to look at the FIV+ solarium. It wasn’t unusual that Thomas was in the solarium, and he’d clearly been sleeping. But as soon as he saw us, and before the couple had seen him, he got up and gave a brief stretch before strolling over to suite-mate Jasper. His timing was perfect; when we walked in front of the FIV+ solarium, he was in the middle of the floor, grooming Jasper’s ears. 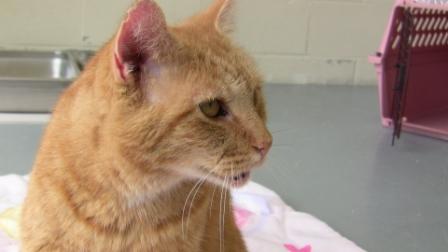 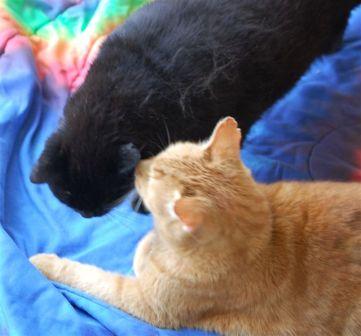 The woman was instantly enchanted. “Isn’t that sweet?” she cooed. “They must love one another!” Not slow to appreciate an audience, Thomas continued to groom Jasper assiduously. Eventually, we wandered over to the next solarium. The couple’s attention was quickly focused on a cat in that solarium, but I shot a glance over toward Thomas and noticed he had stopped grooming Jasper immediately and was now ignoring him completely. I thought it might have been coincidence until we turned to go back inside a few minutes later, after I’d answered more of the couple’s questions. When we walked by the FIV+ solarium, Thomas was once again grooming Jasper. When Jasper tried to walk away, Thomas draped a possessive paw over him and made it clear that the grooming was going to continue. The couple expressed amazement that our cats get along so well; if only they knew!

I don’t know why Thomas chose to put on a show for us. Perhaps it was coincidence after all, or maybe he thinks he’s found the quickest way to a potential adopter’s heart. Whatever the reason, know that it is because of your openhandedness that we can continue to keep His Orangeness comfortable and content. Thank you!