If cats could use keyboards, I’m sure our handsome orange tabby boy would already have typed a letter of thanks to the manufacturers of a particular antibiotic. If you’ve been a fan of Thomas for any length of time, you’re well aware of his pesky skin lesions. They show up out of nowhere, resist all efforts to treat them medically, and eventually go away on their own…except this time.

This time, the skin ulcers, caused by allergic dermatitis with a secondary bacterial infection, just didn’t want to leave. We feared that His Orangeness would have to be fitted with an e-collar. If you’re not familiar with these devices, they look like the old-fashioned neck ruffs worn during the time of Queen Elizabeth I. That is to say, they’re flat neck collars that extend outwards for several inches in all directions, used when we don’t want a cat to over-groom any section of his body. You can guess the typical feline reaction to this: the cats hate them! Fortunately, we found an injectable antibiotic that worked wonders for His Orangeness, and his skin is now healing nicely. What a relief! 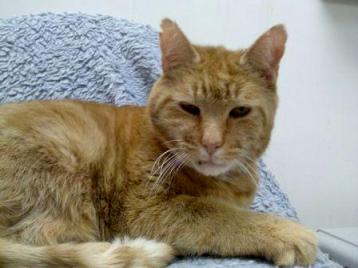 We had thought that Thomas’ former suite-mate Prince Leopold was adopted from FIV quickly, but the newest FIV+ cat, Huckleberry, was determined to break the land speed record for an FIV+ adoption. He was placed on hold to be adopted four days after coming to us, so quickly that he was adopted as soon as he was released from Quarantine and never even made it to his suite.

At this time, we’re not sure who Thomas’ next suite-mate will be. Whoever the cat is, I hope he or she can stay out of the occasional battles that now seem to break out between Nuttin and Chopper. Thomas wants no part of these fights, an attitude we appreciate. He’d rather climb into a lap, but Chopper and Jimmy (another suite-mate) often beat him to it. I continue to hope that our sweet orange boy can find a home with a lap he can call his very own.

As always, thank you for your kind support of Thomas.