There’s mixed news about everybody’s favorite orange tabby this month. His skin lesions, always an annoyance, have returned. Nothing we’ve tried in the way of medication has had any effect on these, but they always disappear on their own over time, and we believe that will be the case here, too.

Thomas was also found to have an unusually low PCV. Let me explain: a team from the University of Pennsylvania, famous for their veterinary school, came out to Tabby’s Place and took blood from the healthiest of our FIV+ residents. This enabled Thomas and several others to participate in a clinical trial conducted here at Tabby’s Place. Veterinary researchers have discovered that a particular medication, typically used to treat vomiting in chemotherapy patients, appears to hold promise for increasing white blood counts and decreasing viral particles in the blood of HIV+ patients. The medication seems to be safe in cats as well, and we’re excited that it may help our FIV+ kitties in the future. The University of Pennsylvania team has been monitoring Thomas and friends’ blood work while treating them with this new medication to see if it’s as effective as we hope it may be. 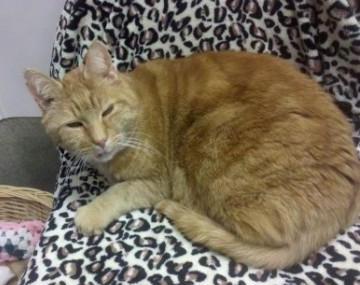 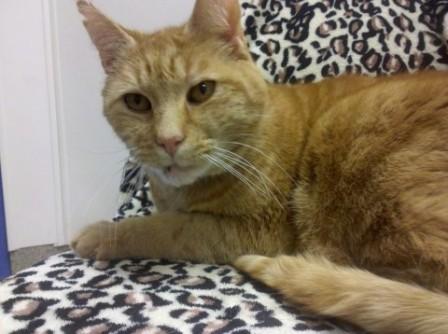 One value they checked for was packed cell volume, or PCV, defined as the percentage of the blood volume that is red blood cells. A PCV under 25 indicates anemia in a cat, while a normal range is between 25 and 45. His Orangeness’ value was 26. Thomas is not anemic, but that low number is something we’ll have to monitor closely, especially given his history of chronic kidney disease.

In other news, our lovable orange guy has been afflicted with FIS (Feline Indecision Syndrome). When he’s in the solarium, he wants to be in his suite instead, and, of course, the reverse holds true as well. It’s almost maddening. He’ll sit at the door in his solarium, crying pitifully, so you transfer him into his suite (remember, he can’t get there himself. We have the tube between suite and solarium blocked off, as suitemates Nuttin and Dusty can’t be in the same place simultaneously). Fifteen minutes later, someone goes into his suite, whereupon Mr. Thomas scoots out the door as it’s opened, makes a beeline for the solarium door, and sits in front of it, crying pitifully. So, of course, he’s let back into his solarium. This would repeat non-stop throughout the day but for the fact that Thomas loves to nap, and he’ll often settle down for an extended snooze in one place or the other. Still, it seems to be getting harder and harder for a cat to find good help these days. Thomas also has two new suitemates: attention-hogging brown tabby Leopold and the very large gray-and-white Chopper.

As usual, my thanks for helping us keep His Orangeness in fine style, even if the service at Tabby’s Place isn’t all he could wish for!