Our charming orange guy has had a medically uneventful month. We’re thankful for that, especially now. You see, we’ve been confronted with something of an FIV+ suite mystery, having found small puncture wounds in the necks of two of Thomas’ suitemates (Nuttin and Jasper) over the past few weeks. Both cats’ wounds are healing nicely, and Thomas appears to have escaped unscathed, at least so far. But we’re baffled as to the cause of this. 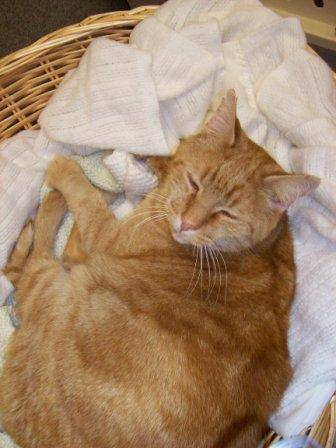 Thomas has spent some of the past month proving the old adage that wisdom comes with experience. It’s been terribly cold in this part of the country, and His Orangeness has been happy to give Old Man Winter a miss by staying inside his suite. Much to our amusement, he has resumed his wrestling matches with Fuzzy. In fact, I now have proof that Thomas starts some of them, because I’ve seen him do it. I actually saw him stride purposefully up to Fuzzy, then quickly duck his head to bite Fuzzy in the leg. Fuzzy took the hint and jumped on Thomas; the two wrestled briefly, then broke off as though nothing had occurred. But a few minutes later, I saw Thomas throw a paw over Fuzzy’s neck, followed immediately by another brief bout of mock-fighting. We know from experience that the two are just playing, and I guess boys will be boys!

In other news, His Orangeness gained two new suitemates over the last four weeks. But lovely Rosie and friendly Jose had no sooner established themselves in the FIV+ suite than both were adopted (by separate families)—a new record for us! Would that our Thomas could be so lucky!
Considering his great personality and good looks, it’s a pity he hasn’t been adopted by now. We’re hopeful that this could be his year.

Meantime, thank you for your support of our loving marmalade boy.