Our enchanting orange boy has had a generally quiet month in the medical realm. The only news concerns a lesion we found on his side. While lesions can be serious, our vet determined that this was nothing more than a “lick lesion”—that is to say, His Orangeness had been grooming himself a bit too much in that one spot. Thomas also had his annual vaccines in the past month.

We all know that our Thomas is generally a pretty mellow guy, but within the last month I witnessed a very strange incident involving him. Longtime volunteer K. was sitting on the floor in the FIV+ suite, with her legs out in front of her. Fuzzy was in her lap. Thomas was on the floor at her feet, playing with the drawstrings at the end of her pant legs. 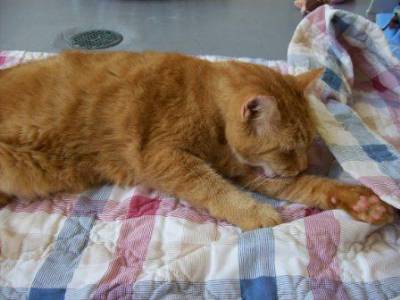 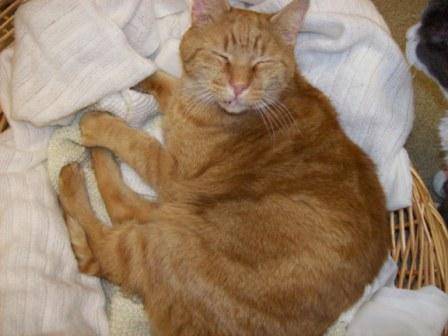 Suddenly, his behavior changed. He began rolling vigorously on her pants and rubbing his chin on her legs, almost as if he was scent-marking as though his life depended on it. He got much “grabbier” with his paws than is usual for him, and at one point got so excited that he actually bit K. in the leg (luckily, she was wearing thick socks, so she knew he had bitten her but didn’t feel a thing). He continued this behavior for a few minutes, then it stopped as suddenly as it had started. I’ve never seen Thomas do anything of this kind before, nor have I even heard of actions like this from him. Perhaps it was a “cat thing”, and, as a mere human, I wouldn’t understand.

In other news this month, we have introduced two new FIV+ felines. Both Rosie and Jose are, um, on the large side, but both are as sweet as can be (toward humans, at any rate). We’ll have to see how Thomas reacts to newcomers invading “his” space!

I almost feel as though I should be sending you a holiday card. Your generous support of His Orangeness makes you an important part of the Tabby’s Place family, and it’s only through your kindness that we can continue to take such good care of our cuddly boy. Happy Holidays, and best wishes for a wonderful 2010!