Our boy has not had the best of months, medically speaking. A monthly weigh-in showed that he had lost 1.5 pounds, a significant amount. So we took some blood and ran tests on it. It seems that Thomas is in early renal failure, a common condition in older felines. We’re not happy about that, but it also doesn’t necessarily mean anything in the short term. Cats can remain in the early stages of renal failure for quite a long time—even years—before the condition progresses.

Oddly enough, though, the early renal failure is unlikely to be the reason for his weight loss, and we’re not really sure what’s causing that. While Thomas isn’t skinny by any means, we’ll keep a close eye on him to make sure he’s eating, and we’ll continue to monitor him especially carefully. 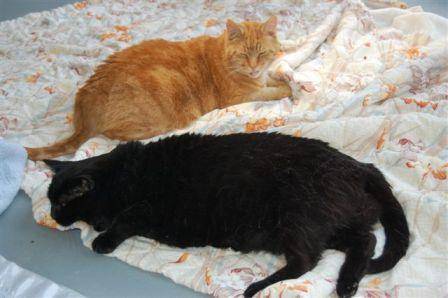 Despite his medical issues, His Orangeness seems to be happy, and he’s clearly enjoying the cooler autumn temperatures. I’ve been trying to spend a little more time with him lately, and he invariably comes over to plunk himself down in my lap whenever I’m rash enough to sit down in the solarium. Once ensconced there, he’s difficult to move, but I know he appreciates the lap time. He becomes mellow enough that he doesn’t object even when suitemate Jasper (pictured with Thomas) rubs on him, something Thomas especially dislikes. In fact, Thomas is so laid back when in my lap that I’ve seen him lean forward to groom Jasper!

We hope to keep our loving marmalade boy with us for a long time to come yet. Thanks to your help, we know we can continue to provide him with excellent care.