It’s a pleasure for me to be telling you about our enchanting orange boy. With his big yellow eyes and whiskers that start out black (close to his face) and become white further out, he’s truly a handsome cat.

At one time, Thomas had been adopted out to a couple, and they reported that they were very happy with him. After many months, however, the couple returned Thomas because they were going to have a baby. We were quite discouraged, because we know that cats and babies can and do co-exist beautifully (a topic we addressed on page 2 of our January newsletter), but at least Thomas had a home to come back to.

After being an “only” cat for a long time, he’s had to get used to the idea that other cats want some affection from the humans, as well, and he can get somewhat jealous if you pay too much attention to other cats in Suite FIV. 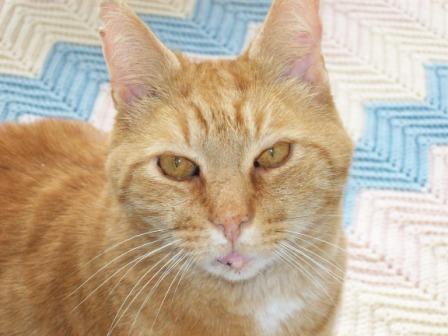 Thomas loves to spend time in his suite’s solarium (the screened-in area adjacent to his suite), where he spends hours testing the breeze, relaxing, or just snoozing. But walk into the solarium, and our sweet boy immediately comes squeaking up to you, looking for love.

He’ll sometimes get onto your lap if you sit down, but it’s more likely that he’ll rub against you once or twice before throwing himself down on the ground and rolling onto one side. This is a signal that he wants a good “skritch” on either side of the neck. Oblige him, and he’ll close his eyes in feline bliss, purring and occasionally rolling from side to side. Thomas likes his toys, too, and enjoys pouncing on almost anything you throw for him.

To our delight, Thomas has remained in good health for some time now (we’re always especially vigilant about the health of our FIV+ crew). He seems to have escaped the ringworm with which suitemate Nuttin was diagnosed, and the fewer cats with ringworm, the better!

I’m looking forward to bringing you monthly news on our special boy, and thanks for your support; it allows us to keep Thomas happy and healthy.