We’re pleased to be able to tell you that it’s been a serene month for our lovable guy on the health front. However, there have been a couple of changes in his world, all having to do with the introduction of new roommates.

I’m not sure whether Esmeralda counts as a new roommate. A beautiful long-haired tabby with funny crinkly ears, she was introduced into the FIV+ suite, adopted in record time, and is now doing nicely in her new home.

Thomas’ other new roomie, Larry, was introduced a bit later, but he’s still there. Thomas appears to be
co-existing peacefully with Larry, which is usually all we can ask of His Orangeness. 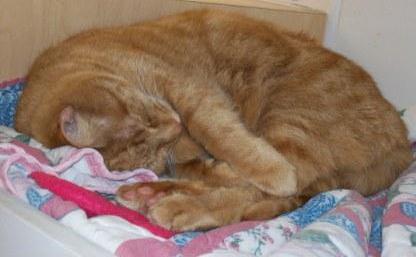 Thomas and Fuzzy continue their afternoon wrestling matches. We know both cats enjoy this play, and the physical activity is good for them. But Thomas is significantly older than Fuzzy and usually wants to stop before Fuzzy is thinking about giving it a rest. We occasionally have to step in and make sure that Fuzzy isn’t pestering our beautiful orange boy too much!

Spring has sprung in earnest. With the warmer weather, our Thomas is once again found more and more often in his solarium, basking in the sun or just testing the breeze. Though we’d like nothing better than to find a permanent home for him, we’re delighted that he continues to thrive at Tabby’s Place.

As always, thanks for your considerate support of our special boy.