It’s time for another update on our gentle tortoiseshell. Zencada has had a busy time in the medical department recently. Over the past couple of weeks, she has suffered several mini seizures. These seizures are mild, last only 15 to 30 seconds or so, and have no lingering effects, but obviously, we are very concerned about them. And so it was that Zen went to see a veterinary neurologist, with whom we are consulting on the best way to move forward. At this time, it’s not clear if these mini seizures are neurological or cardiac in nature; we’ve just discovered that Zen has a new and quite pronounced cardiac arrhythmia. She may get an MRI so we can have a better sense of what’s going on, but that has not yet been decided.

On the flip side, there’s been some positive medical news for Zencada over the past month as well. Her stool has improved so much that we’ve been able to discontinue that medication. And her blood glucose levels have been so stable that we no longer need to check her blood sugar so frequently. 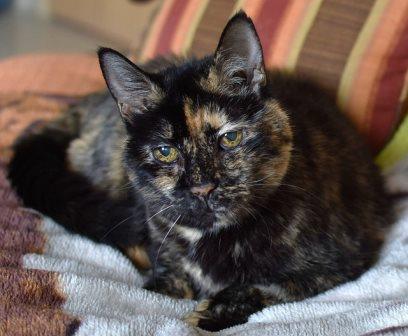 Even with all that, if we didn’t tell you anything was amiss with Zen, you would never know it. Our girl still believes in eating early and often; anything that lands on the table in the lounge must be investigated immediately. Sure, it could just be a plastic carton or a napkin or one of those unfathomable bottles in which the humans keep liquid (Zen has tried to tell us she enjoys flavored iced tea, but we’re not buying it), but then again it might be edible. And a cat has to act fast if she wants to grab a snack while human backs are turned.

We hope you’ll keep a good thought for our sweet tortie over the next few weeks. We’ll update you next month, or earlier if it’s warranted. Thank you for helping us help Zen.