Top o’ the morning to you. The cats and I hope this month’s missive finds you in clover and good cheer.

As New Jersey finally shakes off a stubborn winter, Tabby’s Place has found its latest pot of gold at the end of a…well, railroad track.

You’ll recall that, last month, you generously helped us to heal the wounds of a gentle soul named Ted. The grey fellow was a resident of a feral colony at a small local railroad, and something vile had savaged his sweet face. Tabby’s Place was grateful to help Ted, treating his battle scars and setting him up in a fabulous foster home as he recovers and awaits adoption. You can see him lounging in foster-home luxury at right.

This month, however, the railway mystery deepened. When we treated Ted’s wounds, the railroad colony’s caretakers thought they’d identified the perpetrator. A cat named Willie was the newest arrival at the railroad. Unneutered and uninitiated into the easygoing colony, Willie was charged with testosterone and willing to test the boundaries of his new social scene.

Or so we all thought.

The next thing we knew, wily Willie went from suspected attacker to newest victim. With Ted already removed from the colony and no other newcomers, we’re left scratching our heads as to who is roughing up the railroad lads. 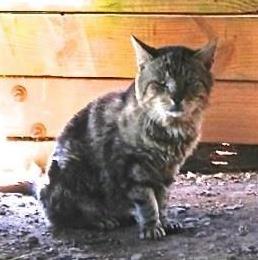 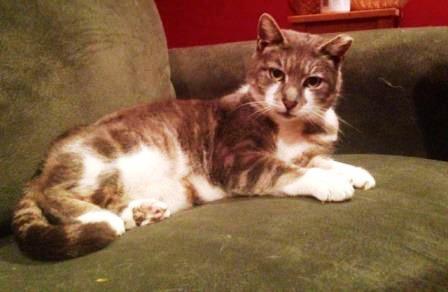 Happily, Willie made his own sojourn to Tabby’s Place. Although his wounds were far less serious than Ted’s, we treated him with care — and neutered him. Since, like Ted, Willie is a major mush-mouse with humans, he’s also on the road to adoption with one of our rescue partners (the eminently awesome Lambertville Animal Welfare, with whom we’re partnering for all the railway cats).

This would not, however, mark the end of our work with the railroad boys. Although many of the colony’s cats had already been neutered, elderly Buddy (pictured below left) had eluded previous attempts. A sweet, sad-eyed boy who always let other cats eat before taking his turn, Buddy desperately needed medical care. With an upper respiratory infection, extensive dental disease and ear mites, Buddy chose just the right time to finally saunter into a trap. While we nursed him back to health, Buddy showed his serious sweetness…and he, too, is now awaiting his forever home.

So what’s next for the remaining railroad boys? Although they love their life on the tracks (and in spite of the example of T.S. Eliot’s Skimbleshanks the Railway Cat), this is clearly not an ideal place for them long-term. Between the clattering trains and the unidentified attacker (a coyote? a crazed leprechaun? Chupacabra?), the railroad is not the place for the cats to stay. And so we are presently in the process of helping with the colony’s medical care as fellow rescuers help arrange for a safe new home for the rest of the felines.

Dear ones, your faithful generosity to our feral cats is making all of this possible. From the fields to the railroads, our feral friends don’t need four-leaf clovers — they have you, the greatest gifts in their lives. Thank you for another month of loving our kitties so generously. Blessings to you this St. Patrick’s Day and always.