The month of April was a revolving door with some hellos and goodbyes for Scooter and the gang of Suite Awesome. 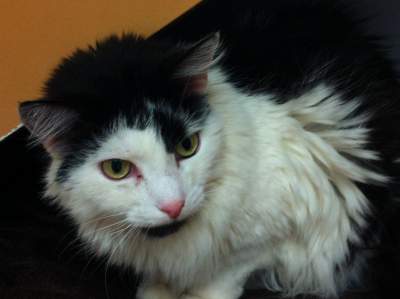 Evan was a new arrival to Tabby’s Place in April. He was placed in Suite A, but I did not see much of him or his interactions with the other cats, as he was a bit of a shy boy when he first came to the room. However, shortly after his appearance on the scene, Evan was relocated to another room in Tabby’s Place, where he is doing very well.

Sabina was a vibrant personality, who I thought would definitely take a shine to our feline-loving Scooter (for you know how he has a way with the ladies). Alas, she lived in Suite A for only a short time before she was happily adopted.

No sooner was Evan moved out and Sabina off to her forever home than three regulars at Tabby’s Place were transitioned to Suite A from another room in the sanctuary: Goldie, Monica and Impy. This trio came from one of the smaller rooms at Tabby’s Place, with the hope being that the extra space to move and increased vertical activity might help them shed some weight.

Goldie and Monica seem to have settled in quite nicely to their new room. I even caught Goldie hanging out with Scooter and his crew up on the ramp where they regularly congregate. Impy has been hiding, which is typical of her. However, I am fairly confident that if she just spent some quality time with our Scooter, he would sway, coax and woo her out of her shell.

Finally, the biggest news of Suite A…Cecille, a longtime resident of Tabby’s Place, was adopted! The most awesome part of this adoption story for Cecille, who was known to be a loner with cats and humans alike, was that not one but two people were interested in adopting her within days of each other. This girl was meant to find a forever home.

If all of this activity has left your head spinning, you are not the only one. Amid the feline rotation and a bout with the flu, which kept me from my normal Tabby’s Place routine, I did not even notice that Scooter had an inflamed eye. I feel like such a bad Correspondent Mom.

But rest assured, nothing gets past the Tabby’s Place staff and vet team, who were all over this and promptly treated our boy with eye ointment three times a day to resolve the issue. I have been told that, much to everyone’s surprise, our boy was a model patient.

Sponsors, Scooter and I are sending you many well wishes for your spring days ahead and heaps of gratitude for your generosity and love of our boy.