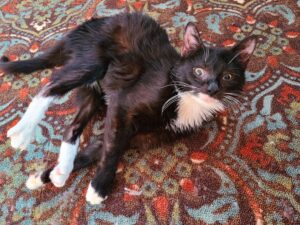 Good news!  Jude had another good month. She only had two seizures this month, although the first one was on Christmas, which doesn’t seem right to me. It was very early Christmas morning, around 5AM.  It passed quickly and she was back to being herself in no time. The rest of Jude’s holiday went very well, and she got some new toys and a lot of treats!  The second seizure was also over pretty fast, but during this one, she did pee on herself and had to take a dreaded bath! That bath was also her second bath this month, the first one being when she managed to get some poop stuck in her fur. She was much better behaved for the second bath because she was still a little quiet after the seizure. We have a very limited window of opportunity after a seizure, to get things done she doesn’t like (like a bath, or clip her claws), before she is back to normal, yelling and creating a big fuss.

Our latest foster, Greylie, left for her forever home. I don’t think Jude cares that she is gone—she really didn’t pay much attention to Greylie. Jude just got annoyed when Greylie would move her toys around. 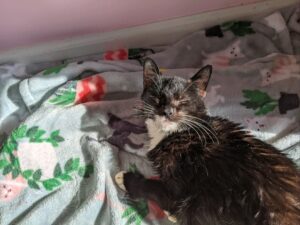 The other day Jude found a sunbeam, and you would think she had won the lottery (or something cats actually care about… maybe a truckload of treats). She placed herself right in the precious sunbeam and looked so very content—she actually looked like she was smiling for a while! Jude loves a good sunbeam more than anything (well, maybe with the exception of that truckload of treats), and won’t move away until the sun leaves the spot. She lays perfectly still and just basks in the bright warmth.

Jude has been hanging out with her brother, Castiel, quite a bit this month. Castiel likes to go into Jude’s room and lay in one of the big, comfy beds in there (she has 3). Jude doesn’t mind his visits at all, and will sometimes lay close to him. He doesn’t move her toys around, so she appreciates that, he just wants to lay on one of the soft beds. He does have his own bed in another part of the house, but he really likes a particular bed in Jude’s room, for some reason. He never takes over Jude’s favorite bed, which is a good thing—instead, he always lays on one of the beds she rarely uses. 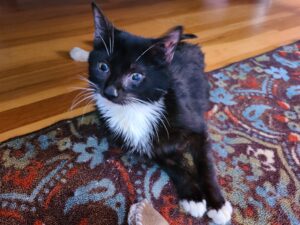 I manually express Jude’s bladder twice a day, but she won’t let me express her bowels, she turns into a very angry girl (even more than usual), so she has to do that on her own. Usually, within a few minutes of her morning bladder expression, and as she comes out of her playpen, she will poop (turdy works, as we call it because she works very hard to do it). This takes a lot of energy, as she circles and scoots, circles and scoots, kicks her back legs, and circles and scoots. Usually, after a few minutes of this activity, she finally produces her poop, at which time Mommy (me) picks it up and cleans the floor. Then it’s time for breakfast (all that scooting and circling makes you hungry). As soon as turdy works and breakfast are done, it’s time for a nap. All that work is exhausting!

Jude is very predictable and likes her days to be the same every single day. Don’t ever be late with anything, especially food and treats, because it throws her whole day off.  Another thing Jude likes the same is bedtime. If it’s getting dark, she wants to be in her playpen. Don’t leave her out in the room after dark, she doesn’t like it (even if the light is on).

That’s all the Jude news for now. As always, thank you so much for everything you do for Jude.  You make it possible to give Jude the care and love she needs to live a good life!