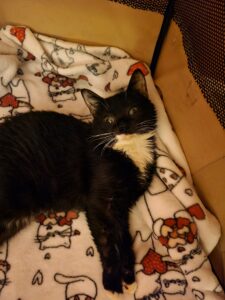 Our little Jude had a few challenges this month. She had three seizures—which isn’t out of the ordinary for her—all of which she came out of quickly when given the rescue medicine.

Jude also had to have three baths this month, which is much more traumatic for her. She HATES having a bath. Two of the baths were because she got urine on herself during a seizure, and the other bath was because she got stool on herself. I try to explain to her that she will feel much better once she is clean, but I don’t think she believes me. During one of the baths she was so mad, she lashed out at me with her claws and a few of her claws stuck in my chest. Then I had a wet, angry Jude compounded with me trying to carefully remove her claws from my skin. Fun! I finally got her free, dried her off, and put her to bed so she could calm down. It usually takes her about an hour to fully calm down from bath time. 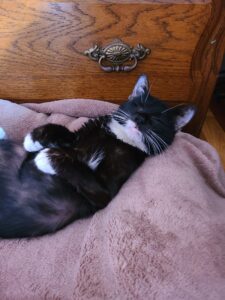 Jude also had a day of terrible diarrhea (bath number three). She always has perfect poop, so I’m not sure what happened to cause this. I went into her room and just stopped in my tracks. There was diarrhea everywhere! All over the floor, all over the rug, and all over poor little Jude. Since she moves around like a paraplegic she had dragged the poop all over the place. It took a while to get her clean, but when she was finally clean I dried her with a towel and put her in her playpen. Then I started cleaning the room. I had bought a special rug for Jude’s room that can be put in the washing machine, and I was thankful for that after this episode.  The next day Jude was back to normal and had perfect poop again. I often wonder what people think when we talk about poop and especially talking about perfect poop. It’s such a normal conversation around Tabby’s Place, and at my house, but I’m sure that’s not the case for everyone!

Jude developed a new way of sleeping… on her back. It is ADORABLE! She looks so comfy and peaceful, with her little footies in the air. I didn’t think she could get any cuter, but I just melt when I see her do this. Of course, I had to get a picture of her sleeping like this for you, so you can see what I am talking about. Painfully cute, right!? 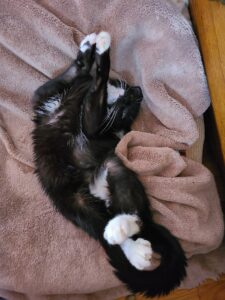 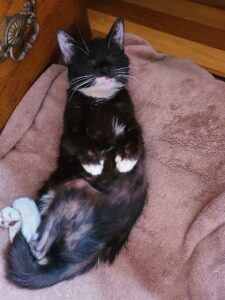 Jude has a temporary new roommate. It is a 6-month-old kitten I am fostering for Tabby’s Place.  Her name is Greylie and she’s full of energy. Jude and Greylie don’t pay much attention to each other, but they are coexisting together with no issues. Greylie can already jump the gate I have up at Jude’s door, so she isn’t in the room much anyway.

That’s all the Jude news for now. As always, thank you so much for everything you do for little Jude. Jude and I would like to wish you a wonderful Thanksgiving, and let you know we are most grateful for you.