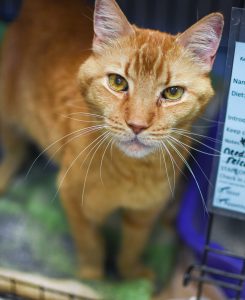 Simon is handsome. Simon is charming. Simon has a gentle personality. Through absolutely no fault of his own, Simon found himself without a family that could care for him. Shelters are often difficult environments for older felines, but Simon lucked out when Tabby’s Place got the call to come to his aide. Not only is Simon an older gentleman, he is diabetic.

Simon sports a beautiful orange coat with sparkling eyes that can peer right into your heart. He also has an obsessive hankering for cheese—particularly the saucy or powdery varieties found on macaroni or snack chips. As the newest resident of the Tabby’s Place Lounge (where most of our diabetic cats reside), Simon gets to join his human staff and volunteers for lunch and snacks. We have learned to tend our food as no one wants cat hair on their Cheetos. 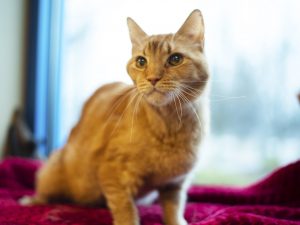 But for as much as Simon craves food, he also craves human interaction. All he really wants is for someone to take a few moments from their busy schedule to pause and pet his particularly soft fur coat. It is rather remarkable because Simon isn’t the tidiest cat at Tabby’s Place. Aside from the telltale bit of cheese dust on his whiskers, he might also have some cat food or litter stuck to him somewhere. But who can possibly care about such things when he looks at you with imploring eyes filled with love for you (and your snack foods)?

Such change in surroundings can be overwhelming for many cats, especially those who are accustomed to the comforts of a home, but Simon has taken the changes in stride. He continues to be outgoing and affectionate with everyone. He even tolerates his less than welcoming feline roommates with understanding and forgiveness. 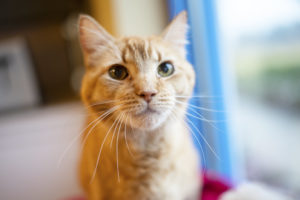 While Simon is technically a senior cat, he has many years of love to share with those who are lucky enough to share his company. With such a hearty appetite for food and love, one would never guess that Simon experiences chronic vomiting. Our medical team monitors and manages his special needs with daily insulin injections, a special diet, and medication to ease nausea. Simon takes all of these annoyances in stride, and promises to love you unconditionally if you chose to sponsor him.

Note: We don’t actually allow Simon to consume our cheese products, but he won’t give up hope.