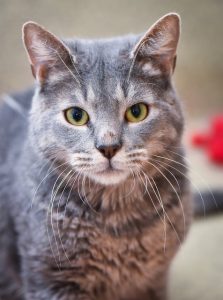 Yes, his name is really “Bacon.” But that’s not the quirkiest thing about our boy.

When the small silver tabby came to Tabby’s Place as a stray, we thought he was a “normal” cat (albeit one who had been cleverly trapped using fresh bacon). Within hours, however, the sweet-but-nervous stray scared us all – especially himself.

BANG! What was that sound? Every few hours, Bacon seemed to slam his entire body into the walls of his Quarantine crate. By the time we ran to his side, all we saw was one confused cat.

Finally, our vet tech caught Bacon’s episode in action: the gentle boy was having intense, electric shock-like seizures in his sleep. Worst of all, the poor cat would have these episodes just as he entered the restorative sleep cycle. Bacon was never, ever getting restful sleep. 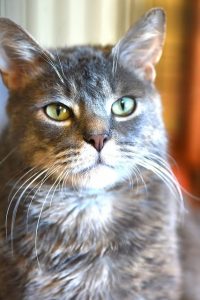 But, since Bacon is a Tabby’s Place cat, there was hope for a fully-rested future. Our veterinary staff vigilantly monitored Bacon’s neurological status, evaluating everything from his sleep patterns and seizure activity to the way he reacts when startled or caught off guard.

We also trained a 24-hour camera on Bacon’s suite to monitor his activity. All of this helped us to understand his very rare condition, and to tailor his anti-seizure medications to his needs.

Understandably, Bacon occasionally acts like he’s not yet had his coffee, giving us glares and “go-away” nips. But that’s not the real Bacon. Despite being chronically sleep-deprived and confused, Bacon is a gentle soul who’s making the best of his strange situation.

When he’s feeling good, he’s sweeter than maple-glazed bacon, head-butting cats and humans and frisking like an overgrown kitten. It’s a testament to Bacon’s athleticism that he can take down a wiggling wand toy even on a bad night’s sleep.

He often seems a bit overwhelmed by reality, but we’ve found the perfect space at Tabby’s Place for Bacon. He shares a peaceful, quiet office with just one other cat, plus our Director of Volunteers, who monitors him closely (and lavishes him with love). Since Bacon is easily overstimulated to the point of distress, he spends the daytime hours in a comfy crate, snoozing peacefully under our staff member’s watchful eye. At night, Bacon’s feline roommate takes over his crate, and Bacon comes out to play — literally, as this is his happiest, most active time of day.

This may all sound like a lot of “special accommodations,” but that’s our specialty at Tabby’s Place. We’re honored to do all we can to keep Bacon safe, secure and loved.

You can be part of Bacon’s team. With you as his sponsor, Bacon’s future is richer than a grand slam breakfast. Please help us to nurture this remarkable boy.