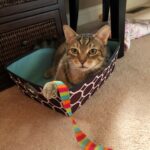 Maybe you were afraid that the pestilence would pounce upon you.

Maybe you were afraid that the cat you’d just trundled to the vet would not forgive you.

Maybe you were afraid that Ozark would never return for a fourth season.

Maybe you were afraid of things reopening.

Maybe you were afraid of things reopening, then re-closing, then reopening and re-closing in rhythm like a demented alligator, biting your open-handed hopes in half.

Maybe you were afraid Ramekin would die.

Maybe you were afraid your mother would never get over your awful half-intended comment.

Maybe you were afraid that your fantastic, bombastic dream would spring back like elastic and smack you in the eyeball while All The People laughed.

Personally, I was afraid that Costco would never re-stock my preferred variety of riced cauliflower, as well as four hundred twenty eight things I could not now recall, not even if my life depended upon it.

Today, you are not fearing those particular fears. Those scoops of “scared” have long since melted, perhaps after falling in slow-motion off the ice cream cone that is you, making you laugh and cry all at once as they hit the ground. The fact that we can’t remember them proves some powerful pudding: (most) fears are ephemeral, exasperating little fools. Dotards, really.

Alas, we forget. Today, you and I are afraid of getting ground to graham-cracker crumbs by a fresh firestorm of fears.

Our feline overlords, while not immune to fears, are better than we are at keeping them crushable.

Consider four fireproof fear-fighters who would seem to have little in common.

On April 29, 2021, Lester‘s greatest fear was the ignoble repeat of April 28th’s 4:05pm delivery of fish mush. (Fish mush manifests at 4:00pm, sharp, or else the sharp end of the world shall poke all the humans. It is known.) Lester was unafraid that he would go unadopted for another decade, unafraid of new neighbors who might turned into noodgy nebbishes and colonize his very personal space.

On April 29, 2021, Fontina‘s greatest fear was the weight of her own greatness. I mean, humans are gnarly and all — we are the species who invented the accordion and Steakumms and hundreds of languages with their own words for “muskrat” — but they are confused little creatures, liable to mistake Fontina’s own littleness for limitation. Fontina was unafraid that she would go un-admired, much less unadopted, much less under-adored for even one unimaginable instant.

On April 29, 2021, El Tigre‘s greatest fear was that people of all species would never fully “get it” that he strongly prefers to go by ET. I mean, tigers are gnarly and all, but ET personally and profoundly identifies as a small green person from a distant orb, and he’s got the weirdness to prove it. ET was unafraid that he would go unadopted, unafraid that he would be unceremoniously introduced to aliens from gaseous planets made entirely of vegan cheese.

On April 29, 2021, Dusty Rhodes‘s greatest fears were the decline in human capacity for thoughtful discourse, the overreach of multinational corporations, the fragility of a post-nuclear society, and Elmo. Dusty Rhodes was unafraid of going unadopted, unafraid that she might get saddled with siblings stupider than Elmo, unafraid that she would soon be introduced to the joys and concerns of a “proper introduction” with actual cats in an actual home.

Quite a quartet, these eminents.

Were you and I in their proverbial shoes (footwear being something cats would rightly fear, should we be foolish enough to strap tiny New Balances upon them), you and I would have been sore afraid. But were we these four particular cats, we would soon hear the (good, great, and glorious) word that we would be getting adopted come summer.

All four of us. 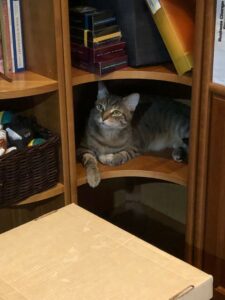 We would have trembled and tottered and hurtled ourselves through entire skies of scenarios.

“Maybe we four will all hate each other. Maybe our new parents will play Paul McCartney’s solo music on a constant loop. (It is a truth universally acknowledged that the only post-Beatles Beatle who cats respect is Ringo.) Maybe it will be a four-sided disaster, a veritable trapezoid of tragedy and teeth and claws.”

Come to think of it, if you and I were in their UGGs, we’d be wrapped up in fear like a waffle cone of woe.

“Maybe supply chain issues will deny us the sardine-filled future we deserve. Maybe they will forget to put my blanket in the dryer, and I will have to sleep upon a lukewarm throne. Maybe they won’t come home tomorrow. Maybe they will come home with terrifying things like toddlers and Komodo dragons and plant-based bacon product. Maybe spring will never come again.” 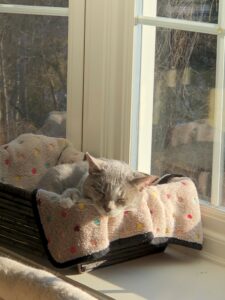 And cats have the good sense not to worry about it.

It was the greatest adoption in Tabby’s Place history.

The sum total of love in the world increased by something like 800% that day, and now it continues to do so on an hourly basis. (Quoth ET: “To the moon! Which is made of bacon ice cream!”)

Fear would have been foolish. 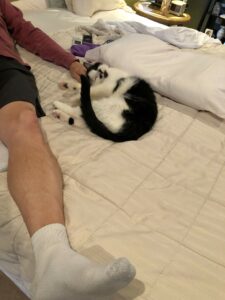 We will worry about the implications and insinuations and ramifications and repudiations of the things we have done and left undone, the stupid and brilliant things we say, the way our love lands or languishes in the right and wrong arms.

But maybe we sweet fools can remember: true or false, fears can never foist us from the good, strong arms of grace.

Like four dazzling scoops of felinity, we will find the scrumptious, and we will prevail.

Life will never be frozen in the safe, static icebox we think we want (we are, once again, wrong). But maybe we can dial down the fear just a smidge, stick to the present like rebellious rainbow sprinkles, and trust that all the unknowns will be unable to unravel us when they do come.

Think back to April 29, 2021. What became of your tiny and toothy personal terrors? 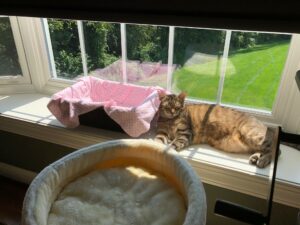 Maybe they manifested; more likely they didn’t; either way, you rose from their rubbish heap.

And if you’re anything like a certain alien and his siblings, you will again.

So let’s think of our fears as gentle simpletons.

They mean well — intending to save us from things like botulism and public shame and subjection to the complete catalog of Justin Bieber — but they’re just not very bright. They get confused. They put their cardigans on backwards and get the buttons all bumbled. They put the ice cream in the microwave and the oatmeal in the freezer.

They are decidedly not cats. 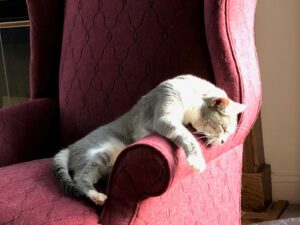 They’re dotards, actually, and the best thing we can do is pat them on the head, lead them by the hand to the couch, and wrap them in a fleece blanket.

And then go adopt four cats, with whom we can share the ice cream of life unafraid.

All photos courtesy of the Fab Four’s adopters, who just so happen to be two of the finest, kindest, truest, coolest, golden-heartedest, raddest and best human beans who ever trod the earth. This is a considerable understatement.